Sing your way to clean hands 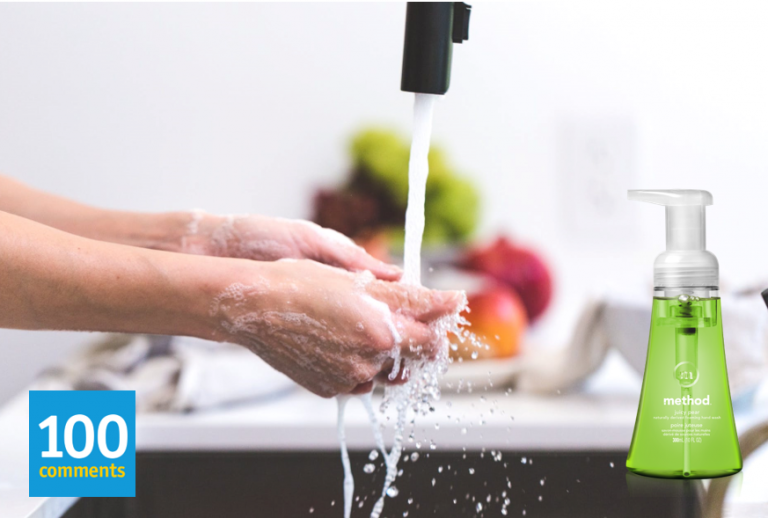 In tough times such as these, we need to be more vigilant when it comes to hand hygiene. In fact, all media – print, digital, broadcast have been practically hard-selling the message almost 24/7 (about the importance of washing your hands) since the start of the Covid-19 pandemic. They aren’t wrong. In fact, Google had a special day to commemorate the inventor of the hand-wash regime, Ignaz Semmelweis – a Hungarian doctor who cultivated healthy hand-wash techniques on the 20th of March 1847 while he was working at the Vienna General Hospital’s maternity wards. Semelweis had come up with the idea of washing hands (namely the 20-second rule we will expound later) after noticing that childbed fever (a 19th century European pandemic) was caused by none other than the doctors themselves who did not wash their hands after prior autopsies and surgeries. These hasty doctors would then proceed to tend to infants and new mothers in maternity wards without disinfecting in any way beforehand, transmitting the very germs from those prior autopsies and surgeries to the unsuspecting infants and new mothers – an unhygienic and disgusting form of malpractice.

On the 20th of March this year – about 15 days into the Restriction of movement order (RMO), a Google doodle was made to honour Semelweis in place of the usual Google logo that greets users as soon as they log into their Google chrome browser. The (interactive) Google doodle is as follows:

Semelweis’s cultivation has now become the basis of all modern hygienic practices, with most healthcare practitioners and even culinary practitioners washing hands before and after every task.

Today, we have the 20-second rule when it comes to washing hands. It may sound bothersome but we assure you it isn’t – or at least not with the fun twist we shall delve into:

Be a handwash artiste

We admit, washing your hands isn’t the most fun task in the world – especially now, when you’re encouraged to wash it every other minute and for the most ridiculous reasons: after unloading groceries from the car, receiving parcels from your courier dispatcher, or even closing your windows – what more when we (the public) are all encouraged to wash it for 20 seconds, as opposed to the usual 5 to 10 (before Covid-19 had struck the entire nation, that is). People are just stubborn by nature. There are some citizens who are blatantly disregarding a law as simple as the RMO – which just requires people to stay at home and not go anywhere. With that being said, these very people can’t be bothered with an impractical 20-second hand-wash rule (impractical because you can’t be washing your hands every other minute thoroughly while counting to 20; there are other priorities and obligations to be done such as schooling and working from home). Furthermore, some people simply do not like being told what to do from start to finish. With this in mind, it’s going to be very hard to be compliant for most people in regards to this 20-second rule.

So how do we make this 20-second-rule more fun and make people actually interested in following it? Simply sing a song – any song, in fact. Some sources might suggest singing ‘Happy birthday’ but for those of you who do not particularly favour the tune, you could switch it up with these well-known, catchy hits loved by almost everyone over the years:-

Of course, the list is endless – with some more modern alternatives added as well. The kids could sing nursery rhymes or any catchy pop songs (kid-friendly, of course) playing on the radio such as ‘Dance Monkey’ by Tones and I or the soundtrack from ‘Frozen’. Due to the duration of these songs exceeding 20 seconds (the usual duration for a song being up to 3 minutes), you might get carried away singing that you exceed the 20-second count for washing your hands.

However, that is in fact much better because you have over-washed your hands and not under-washed them, further eliminating any chances for the covid-19 virus to nestle on your hands and wreaking havoc in your immune system. A small step sometimes goes a long way in making a difference. When it comes to fighting a deadly virus, it’s better to do more instead of less. There is certainly no ‘less is more’ rule when it comes to cleanliness and sanitation in this epidemic period.

Let us guide you through

Not sure how exactly to go about the musical 20-second rule? To give you a clue, here’s a more-detailed guide, using the song ‘Crawling’ by Linkin Park as a musical backdrop: 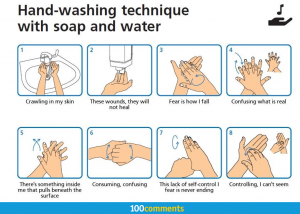 The first line of the song (to be sung according to the tune and lyrics, which you can find here)  accompanies the act of you turning on the tap and cupping your hands under the stream to wet them (for the hydrophilic nature of the soap to work well in fighting germs). That’s the first and easiest step. Next, sing the second line while dispensing soap into your outstretched palm. Be careful not to use too much soap, though. A soap blob the size of a 20-sen coin should suffice. A foamy soap that bubbles as soon as you dispense it onto your hands is more preferable (but that’s a story for much later).

Repeat the step with your other hand, singing “there’s something inside me that pulls beneath the surface”. The next (pretty curt) step is to basically touch the fingertips of one hand to another and interlock them so you are rubbing your fists against your palms from left to right. It’s the shortest step as you only sing two words while carrying it out – “consuming, confusing”.

The second-last step is to clean the thumbs of both your hands – the most important part of the hand in charge of gripping a variety of things throughout the day – by rubbing them both in circular motions while singing “This lack of self-control I fear is neverending”. Once you have cleaned your thumbs, we have reached the last step of the 20-second rule and that is the “controlling, I can’t seem…” accompaniment to the act of pursing your fingers and bringing it to rub your palm (which has most likely gotten dirty again due to the rubbing against each other) vigorously.

Voila! You have completed the 20-second rule in the most fun way possible – and that is the musical way. rinse your hand with water from the tap and dry them using a paper towel or clean piece of cloth (it would defeat the purpose to use a dirty one at this point).

Now, you may have heard about and even seen hand sanitizer selling like hotcakes since the announcement of the covid-19 coronavirus since January this year. That part is, without a doubt, true. You may also have heard that hand sanitizer isn’t as effective as washing your hands thoroughly with soap. That part is true as well – rather unfortunately. Most people are more favourable of the easier and “instant” way to wash their hands and view hand sanitizer as a quick alternative as opposed to washing their hands with the 20-second rule. 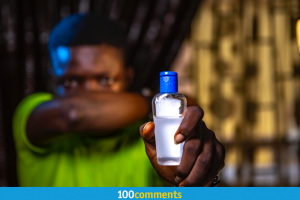 The truth of the matter is, using too much hand sanitizer (which is a form of antibiotic as it fights bacteria) builds up your body’s resistance to antibiotics, which in the long run decreases the effectiveness of any future consumption of antibiotics, making it useless if consumed. True, it might be a simpler way to get your hands clean as opposed to finding a sink, getting soap on them, and singing by it for 20 seconds as you perform the aforementioned 8 steps – what more in public with people watching. However, as with most cases, shortcuts are usually always the less successful method and should be used as what it is – a shortcut; which means to be used sparingly and only when the need arises. In the same way, hand sanitizer is what it is – a shortcut method to practicing hand hygiene in the midst of this viral epidemic. Therefore, don’t be lazy and get yourself to the nearest sink to perform that 20-second hand-wash regime,  whether you have to sing ‘Happy birthday’ or whatever is playing on the Billboard’s top 40.

Why all the hassle?

The reason why there is so much stress placed on washing one’s hands during this pandemic is because the practice of washing hands has been proven over the years to be the most effective hand-sanitizer – especially since Semelweis introduced his hand-wash regime (the one explained two points earlier with pictures) back in 1847. The International Childbirth Education Association labels washing one’s hands as a “do-it-yourself vaccine” that we carry everywhere in -well – literally, our own hands. In fact, healthy hand-wash habits were first cultivated in us by our mothers when we were young – where we were taught to wash our hands after using the restroom, before eating, after touching pets, and after covering our mouths when we cough or sneeze.

The steps are also the same as that of the 20-second hand-wash steps and that is Wet, Lather, Scrub, Rinse, Dry. The next time, if you’re standing by the sink, having trouble remembering which step exactly comes first, just remember these 5 words or write it down on a piece of paper and have it pasted on the wall near your bathroom or kitchen sink. That way, your kids could utilize it too.

Most importantly, remember to always wash-up whenever you can – even more so than usual as this simple 20-second rule could mean the difference between life and death for some during this time of disaster and mayhem. Don’t forget to make it fun! 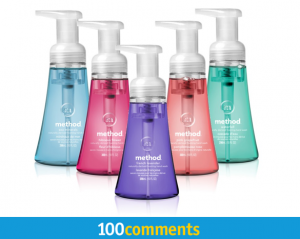 While on the topic of fun hand-wash techniques, Method foaming handwash’s 100comments review page has said it best: ‘Foaming at the mouth, bad. Foaming at the sink with Method Foaming Hand Wash, fun’. Previously, we have talked about Method’s all-purpose cleaning spray and floor cleaner as being one of the pioneers in being chemical-free and natural-based. Today, we’re going to introduce another small-yet-reliable member of the Method family: the Method foaming handwash. True to its name, the Method foaming handwash is made up of (biodegradable, as usual) ingredients that foams once dispensed, making your hand-wash session fun and aromatic (comes in 17 exotic extracts). This handwash, is especially handy for long, 20-second-lasting hand-wash sessions as it produces a lot of foam and lasts long. Natural, fun, and aromatic. What more are you waiting for? Grab yourself a bottle now!