Our Family Reunion: A Parent’s Perspective 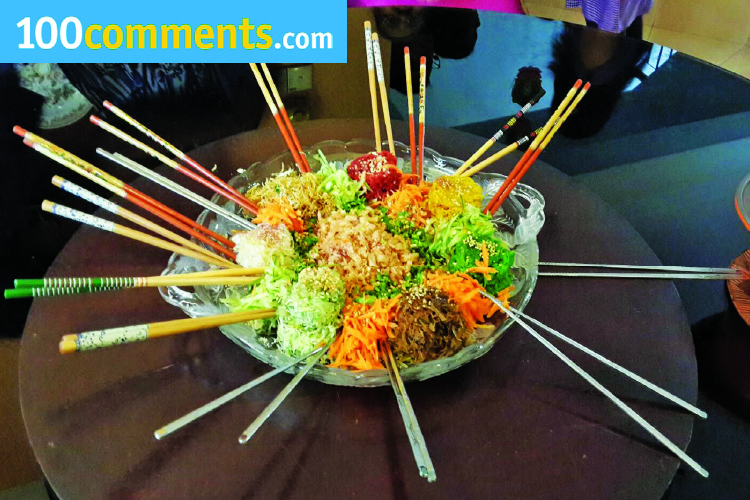 What is colourful, boisterous, fun and loud with 100 arms and 100 legs?

Why, a reunion with 50 relatives, of course!

On the 1st day of the Chinese Lunar New Year, one of my dearest cousins hosted a reunion of sorts at his home. The reunion was the biggest we had in a long time. Understandably though, given everybody’s busy schedules and hectic lifestyle. So when hubby and I were invited for this gathering, we practically jumped at the chance to meet up with our extended family.

For some strange reason, my little ones Kirtu and Kylash were in their most mischievous mood that day. I put it down to the influence of the Fire Monkey, it being the New Year and all! The gathering was a potluck party so I volunteered to make nasi lemak since it was a crowd favourite and also because it was my signature dish.

I was in the kitchen the whole morning while the kids ran wild in the living room bullying my poor husband. The house looked like it had been hit by typhoon Kirtu and Kylash but I had more important things to do at that moment, such as cooking potloads of anchovy sambal! Ah well, the cleaning up would have to wait.

By the time we were all set to go, my husband and I were on the verge of collapse due to the sheer exhaustion of keeping up with our two rambunctious darlings. Off we went, feeling excited at the prospect of meeting up with uncles, aunts and cousins whom we haven’t seen in ages.

The party was well on it’s way when we arrived. The kids were seated outside, chattering away in glee. Kirtu, my almost 3 year old, has always been a very shy and timid one, but she too perked up when she saw so many young faces. Inside the house, the adults were already devouring the delicious fare that had been laid out on several tables. The dishes were a food connoisseur’s dream come true, from yee sang that was tossed to bring in good luck and prosperity; tasty pastas and salads; mouth-watering glazed chicken wings, a variety of sandwiches; tempting trifles and cakes and not to forget, my nasi lemak, which I was fervently hoping would not cause an internal inferno in the mouths of those who ate it!

Initially, Kirtu refused to leave my side and she looked a little apprehensive about joining the older kids in their play session but as the fun and merriment was so contagious, she too could not resist. After a half hour of trailing me around, she suddenly announced that she would be going to the park with her cousins.

I felt a surge of my mama bear instincts surface. Would Kirtu be fine on her own? Would she snap out of her enjoyment and realise that Mummy wasn’t with her and start tearing up? It was the first time Kirtu would be without either parent so I had my fears but deep down I knew that it was time to let go. She was growing up so fast and her tiny face was full of hope that I would grant her this permission to go play in the park. I was all at once so proud that my shy little one was taking this bold step yet feeling a little bittersweet that she was no longer a baby!

A tiny voice inside me snapped me out of my reverie… she was going to the park… not moving out of the state! So I allowed Kirtu to go ahead with the entourage of cousins and an aunt as a chaperon.

My baby boy was already fast asleep on my husband’s shoulder by this time. In the past week, he had mastered the art of frowning at everyone just because he loves doing it! He must have frowned a lot to my relatives as I soon heard that he had been bestowed the nickname “Mr. Frowns”!

By the time Kirtu got home from the park all grubby and sweaty, my husband and I had mingled and chatted away to glory with our relatives, reminiscing about old times and catching up on the latest gossip of what was new in our lives. Now, it was time to head home and tuck in our weary cubs.

After a farewell session that lasted all of half an hour, we were on our way home. From out of the blue, an old tune I love pops into my head…

“The colours of the rainbow so pretty in the sky, are also on the faces of people going by…

I see friends shaking hands saying how do you do,

but they’re really saying I love you…

… And I think to myself what a wonderful world…”