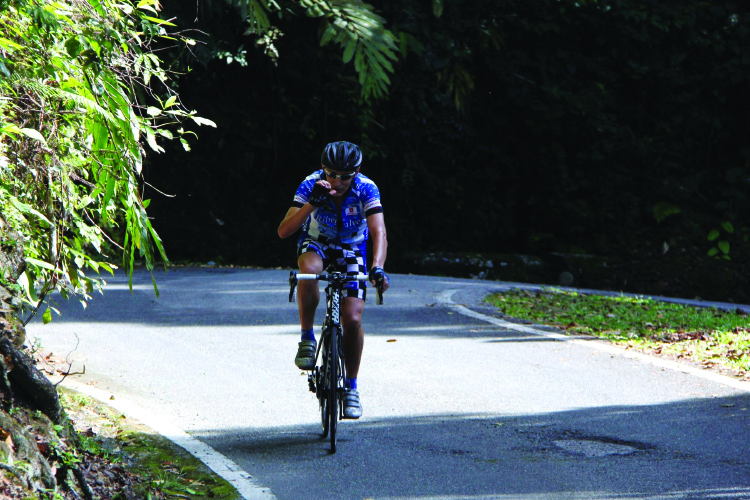 If you have always thought of taking up cycling but were too busy to do so, let a busy executive like Carlos, who hails from Portugal, stir you in the right direction. Carlos, a Technical Advisor at the manufacturer of fine magnet wire, Elektrisola, has been living in the quaint town of Janda Baik, Pahang for the past 18 years, cycles not just for fun but also to keep him in great shape.

Why are you here in Malaysia and how long have you been here?

I came to Malaysia for the first time in early 1996 to help train and develop Elektrisola staff at its new factory. As part of that project, I started visiting the plant twice to three times a year for periods of about 3 to 4 weeks, until I accepted an offer to move here, and settle down in Janda Baik, Pahang since July 1997. The original plan was to stay only a few years, but the warmth and hospitality of the Malaysians made me stay on, enrich myself culturally, and help the company expand from originally about 200 to more than 1000 employers.

Since you’ve been here long enough, do you have any particular Malaysian food that you like the most?

Yes of course! With its diversity, Malaysia is a paradise for food lovers and although most of the time my wife cooks at home, I like to eat Nasi Lemak, Beef Rendang, or even enjoy a simple Roti Canai, not forgetting Durian, which tasted awful the first time I tried, but I’ve learned to love it after trying again.

And any particular holiday destination you like the most in Malaysia?

I’ve traveled quite a lot in Malaysia. And since Malacca is part of our history books, as a Portuguese, I felt very excited to visit the remnants of that part of our history in Malacca, the very first time I came to Malaysia. I remember staying there, looking at the sea and feeling overwhelmed by the great achievement of Afonso de Albuquerque and his men, sailing half way around the world about 500 years ago, traveling for months across the dangerous and unknown oceans, to land at such a peaceful strategic place. Perhaps because of that, I somehow feel a special connection to Malacca and it remains a town that I like to visit over and over again. But we all know that Malaysia has no shortage of beautiful places and I’ve visited all of the states. I have been on top of Mount Kinabalu, inside the Mulu Caves, relaxing in Langkawi, snorkeling in Pulau Redang and participated in countless jungle trekking adventures.

You’re an avid cyclist. Is it just a pastime hobby or more than that?

Along the years cycling became perhaps more than a hobby to me. It somehow became rather an incorporated habit that is already part of my life! I don’t even remember exactly when and how it started. But obviously at the time I was a kid, there were no technology gadgets as we have today, so we used to play a lot outside, sometimes riding on the streets with big adult bikes – there were no smaller ones – and somehow, I managed to keep that exercising habit alive till today.

How long have you been cycling, and what got you into cycling?

Well, I used to cycle in Europe before coming to Malaysia and still have my already over 30 years old racing bike with tubular tires (which are now difficult to get) at home.

Talking about cycling in Malaysia I consider myself a pioneer if not “The Pioneer” of cycling activities at least around the Bentong area where I started cycling somewhere around 1998. I remember people looking at me as if I were an “alien from outer space” before they eventually got used to see me cycling around frequently.

But since the old road surfaces were not as good as they are today and racing bikes were rather the exception in Malaysia, I first started with a quite heavy mountain bike, which I used to explore most of the narrow roads and jungle paths around the area I am living.

Knowing however that cycling alone in the jungle paths was a bit risky, I started moving my cycling activities to paved roads mostly around Janda Baik and the old Bentong road 68, until I managed to buy a racing bike in 2003 and started riding much longer distances.

Why is cycling so important to you?

In 1997, the year I started living in Malaysia, I had to live through the worst haze conditions I could ever have imagined. – not only was the “mega haze” a shock for me, but unfortunately it also affected my respiratory system in a way that I started feeling rather sick and I coughed frequently. After too many doctor visits, I decided it was time for me to start exercising again and try to get my health condition under control and didn’t stop since.

The importance of exercising – cycling or otherwise – still comes to shine when I do my medical check-ups and realise, I am still healthy and in good shape although I cannot turn back the clock and am biologically ageing. In fact, on a occasion when I went to collect my medical check-up test results, I found the doctor – who looked younger than me – going through the papers for a while, before looking at me saying; – “Oh, I wish this results were mine! Things like this encourages me to continue, and besides being a good habit, is one of the reasons physical exercise such as cycling is so important to me.

Do you do any other form of exercise besides cycling?

Yes, besides cycling I am also a runner and depending on the priorities, I might sometimes increase one or the other activity.

Last year, besides other smaller events I have completed the 2014 Putrajaya Night Marathon as well as the Penang Bridge International Marathon.

Although I have been participating in this “major events” in previous years, 2014 was the first time I’ve ventured into the full (42Km) marathon distance, for which I have already registered for this year (2015) KL Marathon and PBIM editions. Although I will not completely stop cycling, in the second half of this year running will be again the main priority of my exercising activities.

What type of cycle do you ride now?

Currently I am riding a Giant TCR2 racing bike, which has a full carbon fibre frame, is relatively light and looks quite stunning as well. Nowadays, there are bikes that can cost as much as a small car. But in my opinion, they are not a necessary investment for hobby cyclists like me, to exercise with the goal of staying healthy… Nice though if one can afford it!

Favourite food & drink: A good fish and a glass of wine once a while

Number of years in Malaysia: 18 years in Janda Baik

What you like most in Malaysia: The warmth and hospitality of the people, the beauty of the ocean around its islands and the cultural diversity

What you dislike most in Malaysia: Haze and people throwing rubbish