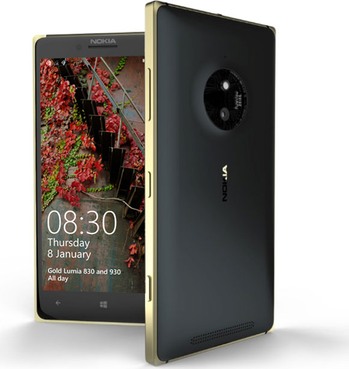 The Nokia 830 features a 5-inch IPS LCD capacitive touchscreen with HD (1280 x 720 pixels) screen resolution which boasts an effective pixel density of 326 PPI. The screen has Corning Gorilla Glass 3 protection and ClearBlack technology which lets you read the screen better when you are out in the sun. The smartphone is powered by a 1.2 GHz quad-core Qualcomm Snapdragon 400 processor paired with 1GB RAM. In addition, the device has 16GB internal storage capacity which can further be enhanced up to 128GB using a microSD card.

The device has 4G LTE support and other connectivity options include Wi-Fi 802.11 a/b/g/n/ac, Wi-Fi Direct, A-GPS with GLONASS, Bluetooth 4.0, NFC and a microUSB 2.0 port. The device is backed by a Li-Ion 2200mAh battery which supports talk time up to 11 hours and is also responsible for keeping the device alive throughout the day.