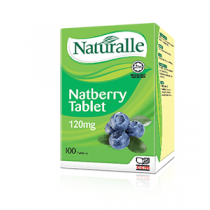 Our eyes are an important part of our health. Bad habits such as staring at a computer, television or other electronic gadgets for too long, not having enough sleep and having an unhealthy diet will slowly but surely take a toll on our eyes. Naturalle Natberry Tablet added with Wolfberry, which is the traditional herb commonly known as the Goji berry is the fruit of Lycium barbarum and Lycium chinense. Wolfberry and Goji berries are synonyms for one of the best-known and admired berries from China, called gou qior kei tze in Chinese. The wolfberry fruit has been used in traditional Chinese medicine (TCM) for more than 2000 years. The health benefits of wolfberry, which is primarily for eyesight, have been recorded from the empirical insights of Chinese doctors over hundreds of years.

With Naturalle Natberry, you enjoy the benefits of both bilberry and wolfberry in a single capsule as an aid to improve eye health and visual acuity.