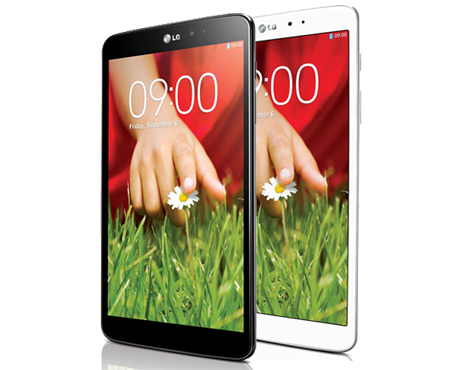 Using the QPair app, each call and message that appears on a smartphone will also appear on the tablet and simple replies can be send through the G Pad. With the 8.3 inch screen, the LG G Pad 8.3 offers an updated version of QSlide, which lets you choose between three different apps at the same time thanks to the larger glass. With Slide Aside, using a three finger slide allows you to move an open app off to the side of the screen and open a new one. The KnockON feature allows users to turn the slab on or off by tapping on the screen.

The LG G Pad 8.3 features 2GB of RAM, with 16GB of native storage. The back and front facing cameras weigh in at 5MP and 1.2MP respectively and a 4600mAh cell keeps the lights on. Android 4.2.2 is pre-installed and the tablet will be available in black and white, weighing 338g.