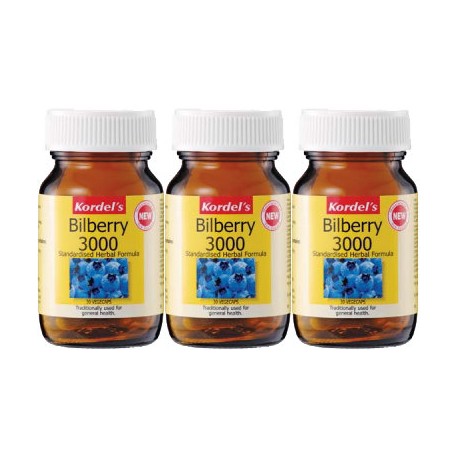 Kordels Bilberry 3000 is a high dose standardized extract of bilberry formulated to assist with visual fatigue and eye strain. Modern medical research on bilberry began during World War II when it was noted that the British Royal Air Force pilots had improved night vision after consuming bilberry jam prior to night bombing raids. This led to many studies on the medical use of bilberry for a variety of visual disorders.

Anthocyanosides, the bioflavonoid complex in bilberries, are potent antioxidants. They support the normal function of connective tissues and strengthen the capillaries in the body. Bilberry extract helps maintain healthy vision and is used to treat a variety of eye disorders. It is a well-known folk remedy for poor vision, especially for people who suffer from night blindness. In the 1960s, French researchers discovered that bilberry extracts improved the ability to adjust visually to dark or bright lights.