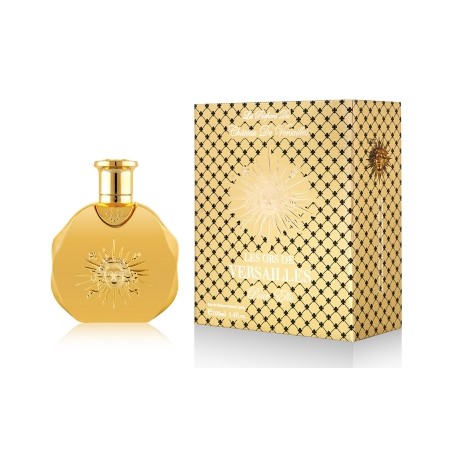 Les Ors des Versailles is like an elfin dancing in the garden of Château de Versailles under morning sunshine, showing the gentle, romantic and playful characteristics of modern, independent, elegant women through the mixture of a fresh, floral and sweet sensory experience.

The top note are an evocation of caramelized pear, the seductive instant fruity sweetness popping out as though dipping the fresh harvested pear into warm sweet caramel. The middle note is pink jasmine sustaining the fruity sweetness to a refreshing floral world. Blooming before dawn in summer, this overflowing, strong aroma represents a charming and attractive woman. Precious amber and white musk in the dry down are then coming to add a pinch of woody romance to extend the soft, warm and mellifluous texture of Les Ors des Versailles.

The Palace of Versailles, is a royal château in Versailles in the Île-de-France region of France. It is also known as the Château de Versailles.
When the château was built, Versailles was a country village; today, however, it is a wealthy suburb of Paris, some 20 kilometres (12 miles) southwest of the French capital. The court of Versailles was the centre of political power in France from 1682, when Louis XIV moved from Paris, until the royal family was forced to return to the capital in October 1789 after the beginning of the French Revolution. Versailles is therefore famous not only as a building, but as a symbol of the system of absolute monarchy of the Ancien Régime.
Begun by Louis XIII in 1623, the château began as a hunting lodge in brick and stone. It was enlarged into a royal palace by Louis XIV. The first phase of the expansion (c. 1661–1678) was designed and supervised by the architect Louis Le Vau. It culminated in the addition of three new wings of stone (the enveloppe), which surrounded Louis XIII’s original building on the north, south, and west (the garden side). After Le Vau’s death in 1670, the work was taken over and completed by his assistant, François d’Orbay.[1] Charles Le Brun designed and supervised the elaborate interior decoration, and André Le Nôtre landscaped the extensive Gardens of Versailles. Le Brun and Le Nôtre collaborated on the numerous fountains, and Le Brun supervised the design and installation of countless statues