The Wonders of Daily Herbs & Spices 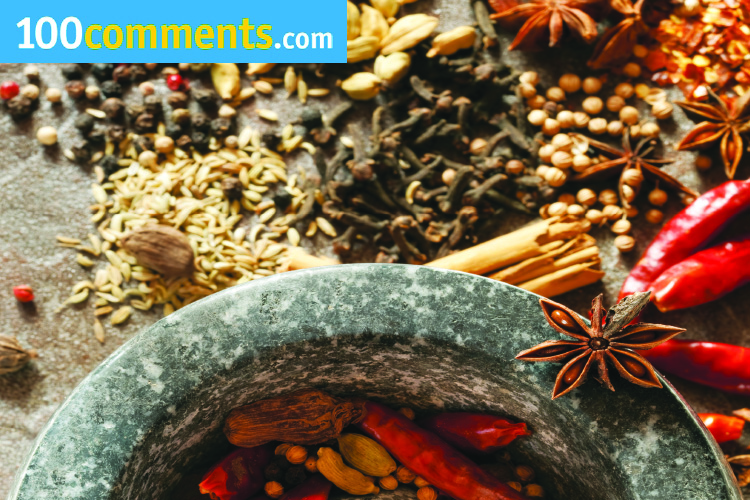 You may have consumed them all this while without realising their inherent benefits. The positive effects of herbs and spices on our health has been recorded for ages and can be seen as the first ‘functional foods’ as they were grown and cultivated for thousand of years – as far back as 5,000 BC. Records show that Hippocrates, as far back as 460-377 BCE, used almost 300 remedies made from herbs and spices.

Today, medical professionals have begun to recognise the benefits of herbs and spices in our overall human health. Some even have suggested that herbs and spices to be included in a new dietary pyramid as more research turn up showing their protective and healing properties. Here are the outstanding health benefits of some very familiar herbs and spices that can be found in our kitchens.

Aside from spicing your meal to add flavour, garlic is also one of the best when it comes to medicinal uses. It’s a powerful anti-bacterial agent and daily intake of garlic is said to prevent minor infections and some forms of cancers. Garlic helps to improve the immune system, to ward off germs and infection. Garlic acts much like Asprin because of its ability to thin the blood which helps to prevent clotting, therefore reducing the risk of heart disease, hypertension and stroke. It contains phosphorus, calcium, iron, riboflavin, thiamine, vitamin C and niacin, with traces of sulphur and iodine which qualifies it to be a powerful antiseptic. Garlic is also said to lower the levels of LDL (bad cholesterol) and raises the levels of HDL (good cholesterol) in our bodies.

Ginger was one of the first spices traded in Western Europe. Ginger is used for treating abdominal bloating, cough, diarrhoea, rheumatism and vomiting. It can help ease the side effects of chemotherapy. Gingerols (compounds in ginger) also appear to have an anti-inflammatory effect, which can help reduce the pain of arthritis. It also helps to regulate the functioning of the gall bladder, lessens intestinal contractions, nausea and vomiting. It can also relieve headaches and stomach aches.

Recent discovery about turmeric had the whole world go a buzz – that it may help prevent Alzheimer’s. Turmeric has other therapeutic properties as well, including aiding digestion, healing wounds and treating skin conditions. Recent studies have found turmeric to reduce the onset of Parkinson’s disease. Curcumin found in turmeric is said to provide for very strong and effective anti-cancer properties. It has been traditionally used to reduce inflammation and relieve joint pain, rheumatoid arthritis and carpal tunnel syndrome. Turmeric is also packed with its fair share of antioxidants and is rich in vitamins that can help prevent cataracts. Turmeric is used as an anti-septic and has anti-bacterial properties. In some Asian countries, it is also used to treat flatulence, toothache, menstrual pain, Jaundice and Colic.

Cardamom extract contains a number of volatile oils that provide numerous health benefits to aid digestion and improve metabolism. Cardamom oil is popularly used in massages and is known to relieve mental strength and ease muscle tension as it has detoxifying properties to cleanse the body. It improves blood circulation to the lungs and can be helpful in prevention of spasms or convulsions. Hence, cardamom in small quantities is beneficial for those suffering from asthma or bronchitis, and various kinds of respiratory allergies. It improves digestion, and relieves stomach cramps, stomach acidity, and flatulence. It is used in the cure of halitosis, and sore throat. It can relieve you from nausea or mouth ulcers. It is also known in treating ailments such as gonorrhea, urinary tract disorders, cystitis and nephritis.

Coriander has powerful carminative properties and is a natural digestive aid that can relieve bloating, and has scientifically shown to relieve symptoms associated with Irritable Bowel Syndrome (IBS). Expectorant action of coriander can be used to get rid of various ailments of respiratory tract, and antibacterial properties of this herbal remedy can be used to improve oral health. Studies have shown that coriander can help is curing diabetes. Rich in antioxidants, this herb can protect against cancer and ageing. Coriander infusion can be used internally to relieve anxiety, stresses, insomnia and nervous tension, and externally to treat acne, skin rushes, dry skin and other related problems. For centuries, coriander has been used as one of the most powerful natural aphrodisiacs.

Nutmeg oil has the ability to stimulate the brain – it relieves stress and stimulates mental activity. Nutmeg is known to have anti-inflammatory properties and can be used to treat joint and muscle pain. It is an excellent liver tonic which can help remove toxins. Nutmeg oil is also a good herb for the kidney, helping it dissolve kidney stones as well as relieve infections. It can help increase blood circulation and stimulate the cardio-vascular system. It aids digestion, rids of both gas and stomach aches and relieves vomiting, diarrhoea, and flatulence as well as encourage appetite. Nutmeg can also help with respiratory problems from cough to the common cold. It is often found as an ingredient in cough syrups. Studies show that it can help lower blood pressure.

Shikimic Acid, extracted from star anise, is one of the chief ingredients in the antiviral Tamiflu drug used to fight avian influenza. It is used to aid digestion and to prevent colic in babies. The seeds have been used traditionally to promote lactation in nursing mothers, increase libido and to relief symptoms of premenstrual syndrome. When taken internally, anise seeds have been used to relief indigestion, colic, gas, bloating, abdominal cramps and to remove nausea and halitosis. It can be applied externally for the treatment of many skin diseases.

Fenugreek seeds have been found to contain protein, vitamin C, niacin, potassium, and diosgenin (a compound that has properties similar to estrogen). It has also been used to treat arthritis, asthma, bronchitis, improve digestion, maintain a healthy metabolism, increase libido and male potency, cure skin problems (wounds, rashes and boils), treat sore throat, and cure acid reflux. Fenugreek also has a long history of use for the treatment of reproductive disorders, to induce labour, to treat hormonal disorders, to help with breast enlargement, and to reduce menstrual pain. Recent studies have shown that Fenugreek helps lower blood glucose and cholesterol levels, and may be an effective treatment for both type 1 and 2 diabetes.

Fennel seeds are high in vitamin C, fibre, manganese, potassium, magnesium, calcium, iron, and vitamin B3. Its health benefits include improving vision, weight loss, essential vitamins and minerals, and reducing cholesterol levels. Additionally, fennel seeds eliminate toxins and cancerous substances from the intestines, improve the appearance of bruises, treat obesity, and reduce inflammation. Fennels are also beneficial against high cholesterol levels due to their high fibre content. Fennels play a major role in reducing inflammation. Vitamin C found in fennels is also antimicrobial and assists for the proper functioning of the immune system.

Oregano is known to have strong antibacterial properties, perhaps as a result of the volatile oils the herb contains. Some of these powerful volatile oils include thymol and carvacrol, both of which have been shown to inhibit the growth of many types of bacteria. Modern laboratory tests have proven oregano to be a potent killer of food-borne microbes and pathogens, including staphylococcus, campylobacter, E. coli and giardia. In addition, oregano oil is a powerful natural remedy in the treatment of athlete’s foot, psoriasis and eczema. Oregano has been shown to have over 42 times the antioxidant activity of apples, 30 times higher than potatoes and 12 times more than oranges. As a matter of fact, ounce for ounce oregano is thought to be one of the most antioxidant dense of all foods.

Onion is a powerful anti-septic that is rich in vitamins A, B and C. It is a potent source of folic acid, calcium, phosphorus, magnesium, chromium, iron and dietary fibre. The high content of iron in onion makes it beneficial for the treatment of anemia. It can significantly lower cholesterol and help prevent heart attacks. Onions are useful in reducing the symptoms of inflammatory conditions such as arthritis and gout. It can fight infection, including E.coli and salmonella, and is effective against tuberculosis and infections of the urinary tract, such as cystitis. It can significantly help to lower blood pressure naturally, to correct thrombosis, lower the LDL cholesterol and prevents heart attacks. It can relieve chronic constipation and flatulence. A compound in onions can prevents the onset of osteoporosis breaking down bone. Onion is a potent aphrodisiac and stands second only to garlic. In females, onions regulate menstrual disorders. In males, it can increase the number of healthy sperms.

In a number of medical studies, the essential oils of cloves are used in dentistry in coincidence with root canal treatment, short-term cavity fillings, and common gum ache. Clove essential oils are found in a number of sore throat lozenges and gargles for sore throats. The benefits of clove which are mainly due to eugenol, the principal ingredient of the herb’s essential oils, works as an anti-inflammatory agent. Clove also contains an abundance of flavonoids that offers the herb’s antioxidant abilities. Clove is also rich in phytonutrient elements and nutrients such as calcium, manganese, dietary fibre, magnesium, vitamin C and omega-3 fatty acids.

Did you know there are almost 100 varieties of Cinnamon? Benefits of cinnamon include the reduction of cholesterol levels and triglycerides and some antioxidant activity. Cinnamon has anti-inflammatory qualities that can lessen arthritis pains. It can also improve digestive health and relieve common stomach discomforts. It’s also believed to improve energy, vitality, and circulation. Just smelling this wonderful spice can boost brain function and reduce irritability. It also supplies manganese, fibre, and iron. It has been used to treat colds, flatulence, nausea, diarrhoea, and kidney disorders. Many women have used cinnamon to relieve discomforts associated with their menstrual cycle.

It has the ability to diminish the amount of gas in the intestinal tract and improve digestion by increasing the stomach’s secretion of hydrochloric acid and stimulate the breakdown of fat cells. It helps to induce sweating, which consequently cools down the body and relieves feverish symptoms, and is useful for those with poor circulation. It stimulates the appetite and has been used to treat anorexics and people with eating disorders. It’s a powerful anti-oxidant and supplies manganese, iron, and fibre. A strong black pepper and mint tea can help clear chest and lung infections and bring up unwanted mucous and phlegm. Black pepper has also been used to treat fatigue and tiredness.

Cumin is extremely helpful in preventing and treating digestive disorders. Cumin is rich in potassium, phosphorus, magnesium, calcium and sodium. It has good amount of iron and small amount of zinc, copper, manganese and selenium. Cumin is rich in Vitamin A and choline. It has good amount of Vitamin C, E, niacin and has small amount of Vitamin K, B6, thiamin, riboflavin and flolate. Cumin is good to cure digestive disorders and to detoxify the human body. It reduces the risk of stomach and liver tumours. It helps cure flatulence, indigestion, diarrhoea, nausea, morning sickness, common cold and atonic dyspepsia. Cumin is also said to help relieve symptoms of the common cold due to its antiseptic properties. It is said to increase the heat in the body to improve metabolism. It is also thought to be a powerful kidney and liver herb and can help boost your immune system.