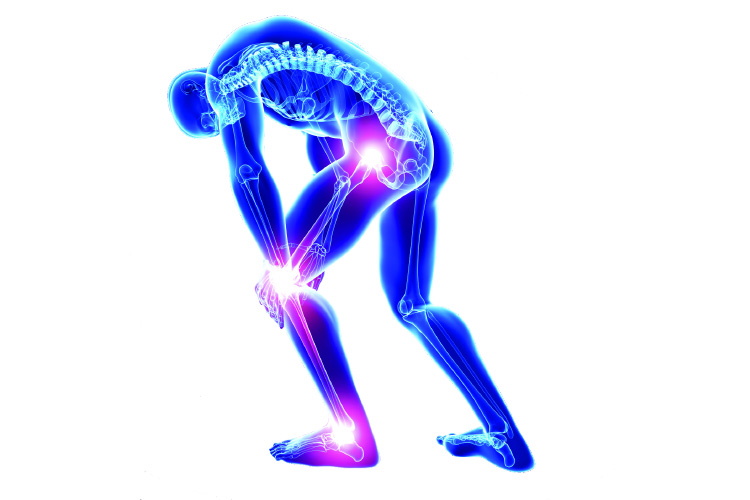 What is muscle pain (myalgia)?

Myalgia is a medical term for muscle pain or pain within muscle tissue. The term myalgia is derived from the Greek word ‘myo’, meaning muscle and ‘algos’, meaning pain. Myalgia can affect almost any part of the body but is more typically used to describe neck, back and limb muscle pains. It can vary from minimal, transient pain to excruciating chronic pain.

What are the most common causes of muscle aches?

In looking at the causes of myalgia, the first thing to consider is whether the myalgia is specific to a certain part of the body or it is generalised. Myalgia specific to certain muscles is most commonly due to injury. The injury may be a single specific traumatic event like a fall or contusion due to direct impact. The injuries are often described as muscle strains or sprains. It may also be due to repetitive mechanical stress, for example the stress from a prolonged run or gym activity. A more subtle form of repetitive stress is prolonged tension within certain muscle groups due to maintenance of a particular posture. A simple example of this is myalgia in the lower back following a long aeroplane or car journey.

Myalgia that is more generalised has a wider range of causes. We have all felt the generalised muscle pains during a viral infection (common cold, influenza, dengue). The myalgia often persists for a period beyond the acute stage of viral infection but will eventually disappear. Treatment is symptomatic and includes reassuring the patient that the myalgia is self limiting.Another fairly common cause of muscle pains which are quite generalised but may also be more concentrated around the neck, shoulders and upper back is the side effect of certain medications. Statins for example which are a class of drugs used to control cholesterol may sometimes cause myalgia and muscle fatigue. It is thus important to alert your doctor of any medications that you may be taking in trying to ascertain the cause of body aches or myalgia.

Besides viruses, bacteria and parasites (eg: malaria) can also cause muscle pain as part of the spectrum of symptoms of the infectious process. In these cases, fever features prominently.Fibromyalgia is now recognised as a medical condition of its own. It is characterised by widespread pain of muscles and connective tissues (tissues which develop the muscles and which connect the muscles to the adjacent bones), as well as muscle fatigue. There is often marked tenderness of the muscles resulting in a heightened pain response to pressure. Doctors do not fully understand this disease yet but it is generally thought that the myalgias felt are due to central sensitisation syndrome i.e an oversensitive nervous system.

Other rarer causes of generalised myalgia are autoimmune diseases (eg SLE, polymyositis), metabolic diseases and chronic fatigue syndrome. A point to note is that not all pains in the vicinity of muscle is myalgia. The pain may also originate from a nerve (radicular pain, neuralgia), a joint (arthralgia or arthritis) or even the underlying bone (eg. osteoporotic pain). When in doubt, consultation with a doctor is advised.

What do I do when having myalgia?

The most common reason for sudden localised muscle pain is injury. As mentioned above, injury may be due to a single event or a repetitive activity. Assuming the pain is not too severe, it is reasonable to manage it with self-care. Remember R.I.C.E therapy at the onset of pain:

I  : Ice the painful muscle with some crushed ice within a plastic bag. Put a small towel between the cold bag and     the muscle to prevent frost bite. Ice the area for about 15 minutes three to four times a day

C : Compression bandage may reduce swelling. Do not apply too tightly as overtightness can compromise       circulation

E  : Elevate the painful or swollen area if possible. An example is to put a pillow beneath the leg when sleeping.

Gently stretching the strained area often provides some relief and also reduces recurrence of muscle tears. Over the counter medications like paracetamol or ibuprofen may help reduce pain. Most minor muscle pains will subside greatly with three to four days of treatment and rest.

When do I need to see a doctor?

If the pain is severe

The myalgia may be due to a more serious injury such as muscle, tendon tear or even underlying fracture. Expert management may be needed

If the pain is prolonged

As a general guide most self limiting myalgias will disappear within a week. Seek a doctor’s opinion if pain is prolonged

If pain is progressive

Self limiting myalgia should reduce with time. If the muscle pain is increasing, or if it is associated with muscle weakness, get an expert’s opinion

If associated with fever

Myalgia in the presence of fever is often a consequence of an infective cause eg. viral or bacterial infection

If associated with signs of inflammation

Myalgia per se is seldom associated with visible redness, marked swelling or warmth of the affected region. The presence of these signs indicates possible underlying infection or a more serious injury.If associated with constitutional symptoms of loss of appetite, loss of weight or severe lethargy

Get immediate care if ‘muscle pain’ is associated with difficulty of breathing or palpitation (rapid heart rate).