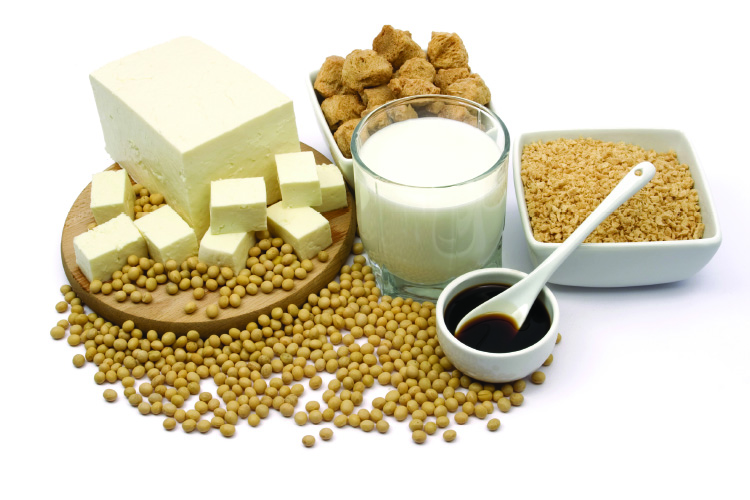 Soy and soy products are found everywhere and used daily in our Asian cooking. Soy is often used as alternative to dairy milk for lactose-sensitive people. It’s perfect protein food for vegetarians. As in any wholefoods, soy is not completely free from controversies concerning its potential health risks. Phytic acid content in soy is one example. It can bind to other dietary minerals to cause mineral deficiencies. Another controversy is the use of soy phytoestrogens as a possible therapy for hormone replacement in older women.

Let’s look at the origin of the word ‘phytoestrogen’. ‘Phyto’ means ‘plant’ in Greek and ‘oestrogen’ is predominantly a female sex hormone. Without oestrogen and the other sex hormone, progesterone, there is probably no female race. The ‘plant’s oestrogens’ in soy-containing foods are the isoflavones consisting mainly of genistein and daidzein. Thus the subject of oestrogens concerns mainly women but men do have a little.

The potential risks of HRT

Woman into menopausal age would have probably been told about hormone replacement therapy (HRT) by their doctors. The recent deep interest in soy arose over the US Women’s Health Initiative (WHI) randomised controlled trials that involved over 16,000 US women of postmenopausal ages in the years 1993-1998 who were put on HRT. The studies revealed an increase in disease incidences such as coronary heart disease, breast cancer, and stroke for those that received the HRT. However, there was a decreased risk of osteoporotic fracture attributed to the HRT study in all the women. The study also highlighted the fact that the HRT used was a combination of oestrogen plus progestin and not oestrogen on its own.

Isoflavones as HRT – is it safe?

Numerous studies both in vitro and in vivo were carried out in the last 15-20 years relating to the estrogenic effects of the isoflavones. Researchers worldwide have firmly acknowledged the biological but weak estrogenic effects exerted by these phytoestrogen compounds in the human body. The chemical structure of this compound is very similar to the human oestrogen, oestradiol; they can act as selective estrogen receptors modulars and bind to estrogen receptors (ER) in the woman’s body particularly the ER beta.

Thus women have reasons to be in the know to make informed decisions as to the use of HRT or bioidentical HRT depending on the safety. This leads us to the question – is plant oestrogens, namely soy isoflavone a safe alternative hormone therapy for women?

Soy isoflavones and other phytoestrogens like flaxseeds when bind to oestrogen receptors, will mimic the effects of oestrogen in the human body. The interesting point to understand here is whether the mimicry effect, being a weak one will lead to an anti-estrogenic (antagonistic) or pro-estrogenic (stimulating) effect.

That is why scientists are interested to find out from the tissue-selective activities of phytoestrogens – if the anti-estrogenic effects could help in reducing the risk of hormone-dependent cancers including breast, prostate, endometrial, uterine and ovarian cancer, whilst the pro-estrogenic effects in others is beneficial in maintaining bone density and reducing low density lipids levels. The extent to which isoflavones exert its estrogenic and anti-estrogenic effects particularly in the incidence of breast cancer risks has been the focus of great many discussions among the scientific community.

Meanwhile, epidemiologic evidence exists in countries where traditional soy products are eaten regularly as in Japan, China and even Malaysia; the breast cancer statistics are relatively lower compared to the west, especially United States and United Kingdom. Soy products are also moderately rich in important minerals such as calcium zinc, magnesium, iron and selenium besides protein and the phytoestrogens compounds. The isoflavones in general also have antioxidant capacity too.

Serious concerns were raised as there were some reports including a 2001 lab study that showed the stimulatory effects of isoflavones on breast tumours cells. Three years later, another animal study confirmed that genistein treatment had led to higher proliferation in the tumor- induced breast cells of rats. The data seems to suggest that dietary genistein can stimulate the growth of estrogen-dependent breast tumours in postmenopausal women who had low oestrogen levels. However, there are several reservations to these studies.

The effect of genistein on the efficacy of tamoxifen, used in the treatment and prevention of breast cancer was slightly mixed. In fact, there was 1998 Japanese research that suggested that fermented soybean product, miso could actually enhance the efficacy of tamoxifen against breast cancer. But many clinical human studies according to Messina MJ, et al (2008) revealed no significant proliferative changes on breast cancer cells as a result of the isoflavones intake.

That isoflavones taken in the normal daily diet is unlikely to increase breast cancer risk in healthy women or worsen the prognosis of breast cancer patients. His conclusion was based on a comprehensive review of more than 130 research papers that found no clear evidence to support the dangers of isoflavones to induce breast tumor growth or to worsen it. That should help to allay many concerns on the use of isoflavone for HRT purposes.

In addition, an understanding of the relationship between breast cancer and oestrogen may be helpful. Elevated levels of endogenous oestrogens seem to correlate with breast cancer in pre-and post-menopausal women. As a nutritional therapist, the use of dietary, nutritional and lifestyle interventions in upregulating oestrogen metabolism pathways to facilitate the removal of estrogen metabolites should be a priority for post-menopausal women. However, it is still recommended to seek informed advice from your professional therapist or your wholistic doctor.