Home › Blog › Riding In Comfort At the Cost of Clean Air

Riding In Comfort At the Cost of Clean Air 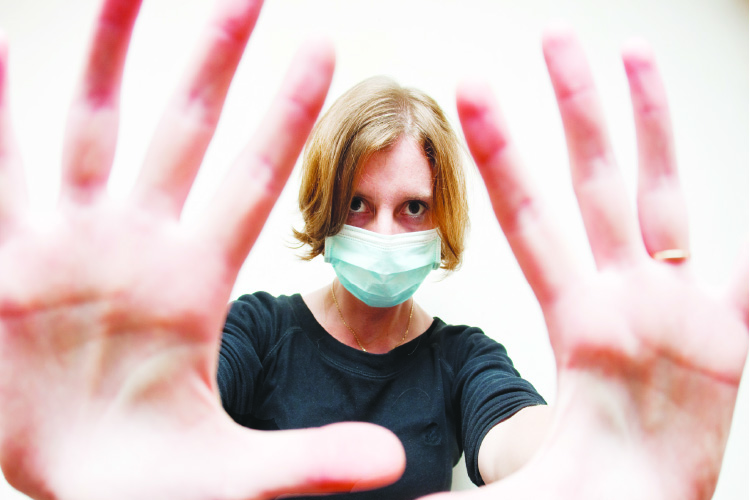 ‘It’s amazing to see you traveling in a public train! Are you not inconvenienced being squeezed like a sardine in that carriage? What happened to your luxury car?’, asked the surprised executive who learned that his section manager had begun traveling to work via the public transport system.

‘Yes sure I’m inconvenienced. It’s not like driving in my luxury car. Nevertheless, I have no regrets foregoing my comfort if it means saving the environment. I train myself to get used to this inconvenience’ says the responsible manager. ‘We should all adapt to this method if we are to reduce our carbon footprint in the near future’.

While driving a normal compact car for one km releases about 175 gm of carbon dioxide, a luxury car releases 311 gm of carbon dioxide for the same distance. An average car covers about 19,200 km each year. This length is the global norm assuming the car is used for routine purposes. Just imagine the amount of CO2 released into the atmosphere by all the cars currently on the roads, and the cars to come in the future. Automobiles alone are said to release 25 billion tons of carbon dioxide a year. Some 60% of air pollution is attributed to transport vehicles.

There are more or less 3,000 new cars on our roads every day. A rough calculation estimates that our roads would have 1.25 billion cars in 2025. On an average, a single automobile is believed to release five tons of carbon dioxide in a year. Eventually, some 60% of the pollution in city skies comes from automobiles. Experts predict that cars were responsible for 69% of lead pollution in the atmosphere. Cars also contribute 70% of carbon monoxide pollution and 60% of ground level ozone pollution.

Well, let’s go back to our carbon-concerned manager traveling on the public train. He saves 2,552 tons of carbon dioxide a year assuming he doesn’t drive his luxury car for one day a week in addition to the two days weekend. But don’t be mistaken; even a public train emits certain gases. An average modern train releases more or less 100 gm of carbon dioxide/passenger/km. Thus, he saves a 547 kg of CO2 in an entire year. Apart from saving some emission in transport, he has other areas like energy, water, heating and cooling, and even food patterns that help to reduce emission.

To put it in simple terms, the air around us is a mixture of gases mainly nitrogen, oxygen, helium, argon, carbon dioxide, hydrogen, and water vapour in tiny amounts. When they are in the right proportion, the air is clean and free from pollution. If the proportion is disturbed by other gases, the air gets polluted. The pollution level is indicated by the AQI (Air Quality Index).

As our roads are full of vehicles, our air is also full of pollutants in different concentrations. As our vehicle population increases, our pollution levels increase with it. As we enjoy riding in comfort, we are exposed to higher pollution risks if no remedial action is taken to neutralise the risk-gearing factors. Eventually, the pollution results in a deteriorating quality of life for everything on this planet.

The following is a list of pollutants found in otherwise clean air:

Any engine giving power to a vehicle does so by burning petroleum fuels. When petroleum is burned, the process sets in releasing certain noxious gases like nitrogen oxides, carbon monoxide, Volatile Organic Compounds (VOCs) etc. Apart from that, it causes the increase of the ground level ozone whereby fog is raised.

The process of burning fuel is a reaction of hydrogen and carbon, which results in H2O and CO2. They are not toxic. They don’t directly cause any harm. However, carbon dioxide in excess in the atmosphere traps the heat from the sun and alters the climate or weather to reach extreme levels. The altered climate brings about global warming and all its results and side-effects, causing much damage to the Earth and its inhabitants.

Due to petroleum combustion process in vehicles, more CO2 is released into the air. The more fuel is used up, the greater is the amount of carbon dioxide loaded into the air in addition to other pollutants associated with fossil fuel combustion.

The three undesirables while combusting

There are three factors supporting the pollution when fossil fuel is burned in an engine:

Normally, city people face the greater part of the brunt of air pollution. Maybe it’s the price they pay for enjoying the comforts and convenience of the city. According to BBC, Londoners die more by pollution than road accidents. An NHS report concludes that more than 1200 people get hospitalized every year due to road transport related air pollution. One in hundred Londoners die by air pollution related maladies every year. Many city dwellers report breathing difficulty due to vehicle fumes. This reminds us of what Mayor Ken Livingstone once said after reading the report that ‘It is more harmful to walk down the street than to cross it’ (source: BBC News)

Traffic pollution is not only limited to the surrounding air. It also contributes to noise pollution that disturbs sleep. Eventually, one with disturbed sleep invites a variety of health risks like productivity loss, stress, loss of appetite etc. Aircrafts and trains too add to noise pollution, so road vehicles aren’t the only ones to blame. Thus, living in a city free from pollution becomes more and more difficult.

The chart below shows the proportion of different pollutants emitted by a variety of transport machines. 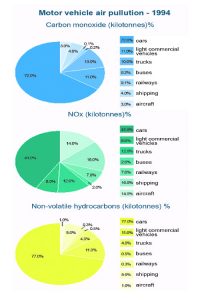 What’s my role in cutting down air pollution?

The foremost of all measures is the awareness. Besides being unaware of the lethal effects of air pollution, most of the motorists think what, after all, is going to be achieved by a single person in reducing emission. The world is too big, and I am one of those in the more-than-six billion population. Yes, you may be one among that huge population, but the way you play your part in reducing emission is something great. When you start feeling this pinch of responsibility, you would start doing things without polluting the environment. Those around would soon follow you. It would create a ripple effect whereby the pollution awareness spreads – thanks to you and other responsible folks.

Apart from controlling emission by driving less, there are other ways to work do your part. They are:

The rising air pollution is something serious. The region you live in may not currently face any risk. However, it doesn’t mean the region is always safe or will be safe forever. Let us carry out less pollution-causing activities and save ourselves and those in the disaster belts.