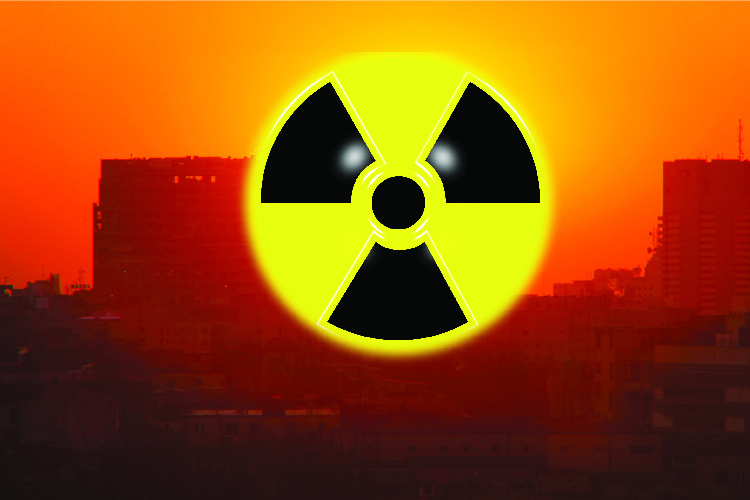 The SMSes on radiation at the collapse of Japanese atomic reactors quite recently seemed to have spread faster than the radiation itself. Some people refrained from coming out of home fearing radiated particles settling on the skin or breathed in. Some others warned of exposing to raindrops carrying radiation. Some refused to eat seafood fearing the sea animals carrying radiation particles. Some illiterate folks even mistook the term radiation to radio station. It was the talk of the town soon after the tsunami calamity in Japan.

The people were free to take all mass media in support of their panicking perception. The media too beefed up the panic annotating radiation impact reports from all available archives. It was a common scene to see most of the public worried on radiation even without knowing what actually it is.

Radiation is a kind of energy passing through. Radiation is found everywhere. Sunshine is a kind of radiation. It has light and heat energy. The rays have short and long wavelengths. The longer ones are infrareds and the shorter ones are ultra violets. We are concerned of UV rays and take ample protection from being exposed to. Meanwhile, we keep receiving some radiation in low doses. So long, the radiation remains in low dose, we are safe. Yet, scientists say the net effect of the radiation increases the risk of cancer (carcinogenic).

Classified into two kinds, ionizing radiation is more harmful. An ionizing radiation is a kind of energy that can interact with atoms and separate electrons. Our cells are full of fluid masses. The fluids have masses of atoms. The separation of electrons may cause an indelible effect on the shape and chemical properties of the cell. Tissues are mass of cells. Hence, the tissues are mangled or deformed when receiving radiation. Radiation theory is a faculty of its own with a diverse and complex volume of information. However, let us look at it briefly in terms of health and environment.

Ionizing radiation is stronger to release energy enough to separate electron from the atom and it can disfigure the atomic structure.

This kind of radiation is electromagnetic waves. They are weak enough to break the electrons in the atoms. Normally, it is a controlled radiation. Radio waves, micro waves, infrared are part of non-ionizing radiation.

How is radiation measured?

The effect of radiation on the human body tissue is measured by a term ‘mrem’. The term mrem means millirem. One rem has 1000 millirems. A millirem is the smallest of single unit of radiation effect. It is more like milligram, as the doctors and pharmacist often quote for the medicine strength. Anyway, let the unit be called by any term.

The health risk by radiation

Following is a list of radiation effects on human health.

Obviously, radiation is harmful to health, environment and agro products. Radiation is sure mutagenic. Nobody wants any exposure to radiation of any kind. We still hear stories of atomic bombs dropped in Japan in the World War II and the devastating effects even after decades. Yet, radiation is not new to us. We cry foul only when some incidents beyond control occur to release radioactive particles or rays. We don’t have to wait for the reactors in Japan to leave some radiation impacts on us. We have it right in our neighbourhood itself, but in mild or low doses. Yes, we keep taking radioactive effects in tiny doses everyday resulting from our so called modern lifestyle.

Ever since the big bang, earth keeps releasing low radiations from the interior of it. Radon is a radiated atom constantly released from the soil and soil components. This kind of radiation is inevitable. A common person in the US receives 360 mrem of radiation every year. Similarly, each of us is radiated in tiny doses.

Sitting before your TV for 4 to 5 hours a day is a miniscule of non-ionizing radiation. The circuit of electricity to the different gadgets sends a mild level of radiation.

Modern diagnostic gears in medical facilities are another concern of radiation. The medical practitioners are more in favour of diagnosing illness to hundred percent accuracy. No doubt they have to resort to modern imaging devices like x-rays and scans. When someone is involved to such diagnostic process, the person, no doubt, is receiving a dose of radiation, if not intense.

Tobacco smoking is an ongoing activity while the harmful effect of it is loudly alarmed on all available media in the world. Radioactive lead and polonium found in tobacco smoke is enough to expose the smoker with 1300 mrem/year (presuming 1.5 pack a day smoked). Even if you don’t smoke, you are still a victim when you have smokers living around.

Thus, each of us is surrounded by radiation, both by natural and human induced. However, the risk depends on what dosage is radiated to us. Our body is the hero. The body goes on continuously repairing the tissues damaged by radiation. When the speed of damage exceeds the speed of repair, we lose our war to the radiation.

How we can protect from the radiation by natural ways?

• Include chlorophyll rich food in your daily food. Seaweed, blue green algae, chorella are some of the food. They contain rich minerals including iodine that protects the thyroid.

• Eat anti-oxidant foods such as cherries, blue berries, pomegranates and sweet potatoes. They clear out free radicals and toxins from the body.

• Hydrate with at least 8 glasses of clean water a day. It helps to hydrate the body apart from flushing out impurities.

• Take vitamins C, D and E that could reconstruct the tissues damaged by the radiation.

• Try to take herbs like dandelion, peppermint and chrysanthemum that help to detoxify the body.