Home › Blog › Mummy’s Diary: The Most Priceless Job in the World

Mummy’s Diary: The Most Priceless Job in the World 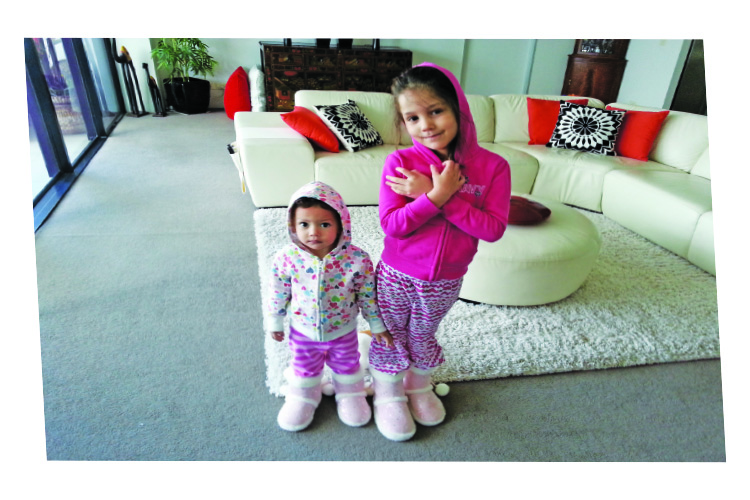 In this article, Gayatri Unsworth talks about her journey as a stay-at-home mum and why she believes that taking a break from her former career to become a full-time mummy has been the best thing she has been able to do for her two daughters, her family and herself.

So, I got asked the dreaded question again. One minute I was sipping my cup of tea and enjoying watching my daughters chase each other around the garden and the very next I was being queried rather brusquely as to when I was going to go back to work.

I had woken up at 7am that morning or rather, I was woken up at 7am by my youngest mewling out to me from her cot. This then led to my eldest jumping out of bed and mumbling something unintelligible about racing downstairs and getting started on a glitter glue project. Terrifying words for a mother at any point of the day, but even more so at the break of dawn and when one is still trying very hard to open both eyes and get into a semi upright position.

I eventually got my legs to move and proceeded to go downstairs and prepare breakfast for two little girls who were ever so helpful, in that they tried really hard to keep the table clean by sweeping their crumbs unto the floor. I then cleaned-up, answered a million random questions about all sorts of things and because the table was now spotless, the evidently sane person in me decided to bring out the Play-Doh box and spent the next hour admiring the creations of my kids and silently fretting about when I was going to get started on lunch.

I then cooked lunch, whilst simultaneously refereeing the various arguments, which resonated quite regularly from the playroom. Afterwards, I gave the girls their lunches and put them down for their afternoon rest, before doing a load of laundry, washing up dirty dishes and starting to prepare for dinner. Before I could blink, they were up and I sat down with them and pretended that I really cared about which shoes Barbie should wear to the party she was going to. Then it was dinner-time, followed by a play in the garden, which is when I was asked the oh-so-wonderful question of when I was planning to resume work.

Somehow the events of the day which preceded that question did not appear to count as work. Surely, juggling a 12kg, teething-and-therefore-in-a-fabulous-mood toddler on one hip whilst stirring a pot of pasta sauce and simultaneously attempting to explain the laws of gravity to my 6-year-old, who is attempting to fly like Peter Pan, would fall under the category of ‘work’. I’d even go as far as to label it ‘hard labour’, considering the toddler was alternating between chewing on my shoulder to ease the pain on her gums and yelling into my ear that she wanted to eat raisins and not the pasta I was diligently cooking for dinner.

It’s often assumed that a stay-at-home mother isn’t quite doing any real work. I am not entirely sure where this assumption comes from, but I guess it’s loosely based on this idea that we don’t actually leave our homes to go out to work and that we have no bosses peering over our shoulders: Nor do we seemingly have monthly KPIs to fulfil. But the reality is, I do work and in fact, I work really hard day in and day out at being the best mum I can be to my two daughters.

I might not have bosses, but in my children, I have team-members who are quite often erratic and unpredictable. They might not peer over my shoulder, but they have no qualms about climbing all over me and sticking their heads under my skirt. Their idea of problem-solving is often stamping their feet, crying and running straight into my arms. If you think your boss is scary, wait till you see a 6-year-old react to her sister flushing her prized painting down the toilet.

And as mums, we actually do have KPIs too, lots of them in fact. Sleep training, toilet training, not chewing on your sibling’s body part training, manners training, eating training, reading, writing, spelling, riding a bike……..I seem to have an endless list of goals that I am constantly striving towards with both girls. As for not having to go out to work, I can assure you that the opposite is true. Because one busy toddler and primary schooler isn’t enough fun for me, I battle traffic and take them out to extra playdates, play-gyms and birthday parties, because a room full of noisy young children running around creating mayhem is totally my idea of a fun day out.

After 6 years of being a mum, I have been on the receiving end of various assumptions about my choice to care for my daughters myself, rather than continuing with my professional career. I generally don’t pay much attention to such insinuations, as the person who matters most, my husband, supports me entirely in my choice to care for my girls full time. And as much as I know that what others think and say shouldn’t really have a bearing on what I do with my life, it nevertheless stings occasionally to be considered as less worthy for doing what I believe to be the most important job of all – raising my children.

I cannot reconcile the somewhat commonly held notion that somehow looking after one’s own children does not count as doing something worthwhile. Either because there is no financial compensation to being a full-time mum or career prospects, it seems like a pointless role. But surely taking the time and effort to raise the next generation is an endeavour worth undertaking.

People ask me all the time if I miss my old life, where I got to get dressed up and went to work and hung out with other adults doing presumably adult thing. Of course I do, but only from time-to-time. It was nice to only have to care about me and no one else’s needs. It was nice to decide how I wanted to spend my time and eat, drink and sleep according to my own schedule. But do any of those things come close to being as good as what it’s like to be at home with my girls? Absolutely not. I cannot even begin to compare the two.

Deciding to become a full-time mum has been the most important decision I made since having children and I have no regrets whatsoever. Of course there have been moments where I have wished that I was staring at a computer screen rather than the cheeky toddler covered in the dinner she’s managed to get everywhere but her mouth. There have been times where I’ve had a rough long day with a few too many tantrums and bawling extravaganzas and I have reminisced about my corner office back in the day, with its quiet calm and serene space.

And yes, every so often I catch sight of my former corporate wardrobe shoved to one side by an increasing collection of practical mummy outfits and remember how much fun it was to stand at a lectern and deliver lectures on subjects I am truly passionate about. (Mind you, my eldest will tell you that I am still big on lecturing). But such thoughts are merely fleeting instants where I simply overlook the reality of how truly lucky I am to be able to be with my children every day of their lives.

I really don’t believe that by taking a break from my former career as an educator and a journalist that I am dooming myself to a bleak future. I’d like to think that the same way in which my past education and professional roles are now contributing to my skills as a mother, that someday, when I do reacquaint myself with the corporate world, that my experiences as a mother will make me an even more well-rounded professional.

But perhaps most importantly, I’d like to hope and believe that someday my children will be happy, confident and self-assured adults, who are also responsible and valuable members of society because of the time, effort and attention which was invested in their childhood.