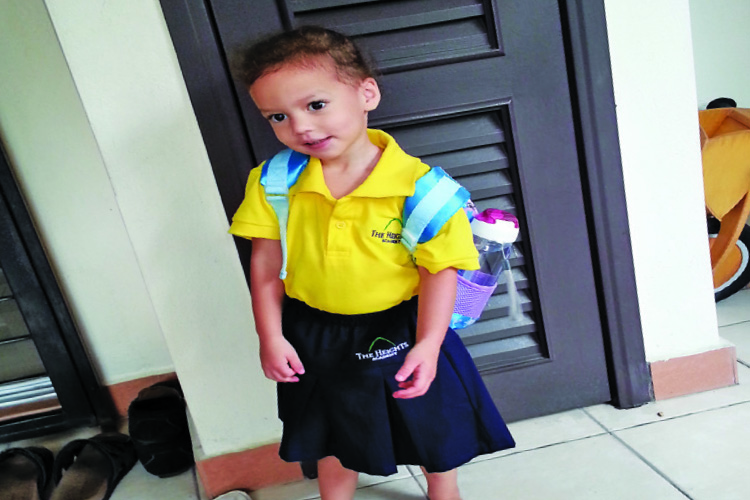 In this article, Gayatri Unsworth shares her feelings about sending her little one off to pre-school and coming to terms with not having her toddler around her 24-7.

My youngest, Chelsea, just started playschool at the beginning of this year. It’s been a rough couple of weeks, lots of tears at drop-off, even more weeping afterwards and a very big case of separation anxiety. That’s all me by the way, not her.

I’m pretty sure that my little tinker is coping with being away from home far better than mummy is. Even on her first day at school, where I was allowed to stay, I had to go in search of her at various points because she kept running off instead of sticking to my side, like I had simply expected her to. She’s a total mummy’s girl and if you ever see me sporting a suspicious bulge, rest assured that it will only be Chelsea hiding underneath my clothes trying to get some skin-to-skin contact. I’m a big fan of attachment parenting and as a result share an extremely close bond with both my daughters.

Chelsea was breastfed on demand for a significant period and I’ve baby-worn her since birth and I still do, so as you can imagine, she’s always had mummy at arm’s reach. Which is why it came as even more of a surprise when she adjusted to being at school and away from me far better than I could have ever expected. And now it appears that it is mummy in fact suffering from a severe bout of Chelseaitis.

I felt very much along the same lines when my eldest first started at playschool a few years ago and I did get over it eventually, with the aid of a few boxes of Kleenex and jars of Nutella, it must be admitted. But it somehow feels harder this time around with Chelsea. Maybe because I already knew what to expect from having done it before, saying goodbye to my second baby has been just that tad bit more painful.

I know, I know. I’m not packing her off to boarding-school (not yet anyway). She’s only going to be away from me for a relatively short span of 3 hours every morning, 5 days a week. Yet, it’s still 3 hours of a silent child-free house. I’ll probably feel differently when the school holidays come around, but right now, the absence of my spunky little girl is well and truly being felt.

Don’t get me wrong; it’s not as if I haven’t done anything in the last few years other than being mum. My life hasn’t been exclusively about changing nappies, helping build Lego models and convincing my children on the merits of eating their vegetables.

I’ve had a number of of other projects on the go even after pressing pause on a full time career to raise my daughters; I’ve written this column for almost 3 years now and I facilitate training courses and workshops as and when I can, amongst other endeavours. It’s just that none have truly consumed and enveloped me the way being a mother has. I have spent the better part of the last decade dedicating every ounce of my energy and every fibre of my being, for better or for worse, to being the best mummy I can be. So to suddenly have that security blanket taken off, folded neatly and put away for a period of time every morning is fairly daunting.

I’ve often reflected on what I would do as soon as I got some child-free time and had the kind of crazy thoughts only parents of young children would have, like having a very long, very quiet uninterrupted bath, sleeping for hours on end or savouring a piece of chocolate without a little mouth trying to nibble it away right from under your nose.

So how will I fill the hours between 8.30am and 11.30am in the coming weeks and months? I could clean the house I suppose. Our full-time housekeeper returned to her home country for good last year and because I share my home with two busy little girls, there’s always something to clean up or sort out. But then again, my part-time cleaners have been doing such a fabulous job and truth be told, I don’t really want to be plugging the hole that is my lonely heart by sucking up dust and scrubbing toilets. In any case, once the children do come home from school, messes will be inevitably created so I think I’ll pass up on the cleaning duties whilst they’re not around.

Perhaps I might throw myself into becoming a better cook. It’s no lie that my culinary skills could do with some improvement. I had always suspected it, but all doubts were removed once and for all after I heard my eldest raving over a meal Daddy had cooked her last year. Or perhaps I might busy myself with finally getting around to completing my first novel, which I initially started writing back in 2003. It’s been almost 12 years now, and the heroine is still waiting with bated breath in Chapter 7 to reunite with the main protagonist who disappeared somewhere between Chapter 2 and 3. I have in fact forgotten where he’s gone.Or maybe I’ll go back to learning yoga. I did a basic course years ago and have since managed to impress both my children with all sorts of bendy antics, but they’re increasingly coming up with even more impressive stunts of their own.

But then again, maybe I just won’t make any plans at all. Maybe, I’ll just enjoy a few hours every day where my life isn’t dictated by routines and schedules, as a parent’s life so often is. Maybe I’ll sit around really missing my girls and reminisce in peace and quiet about every single thing that’s special and amazing about them; something that often gets overlooked and lost in the chaos that is parenthood. Maybe I will, from time to time, lie around in my pyjamas until midday, despite not having a toddler to share my bed with and read something other than Roald Dahl and Julia Donaldson.

So yes, although sadness does indeed cloud my heart now, I’m sure this too will pass. Whilst I will never stop missing my children anytime they are away from me, perhaps this luxury of time I have been given to recharge myself will mean that they get an even better mummy when they come home from school.