Home › Blog › IBD and IBS – Do You Know the Difference?

IBD and IBS – Do You Know the Difference? 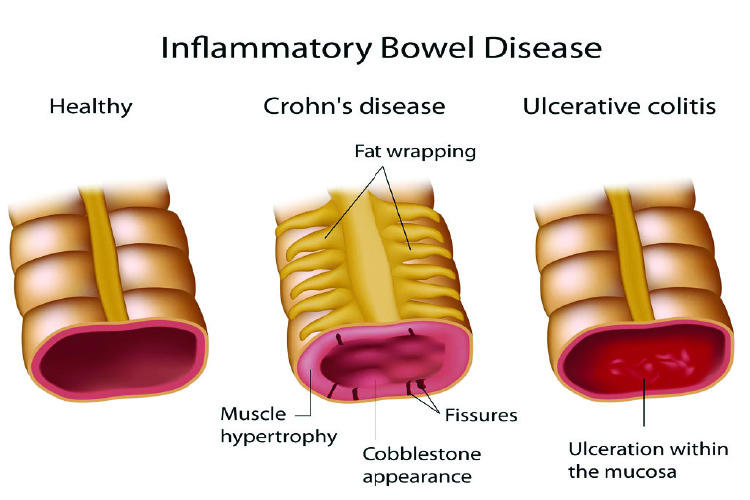 Although they both sound similar, they are in fact very different. IBD is the acronym for inflammatory bowel disease whereas IBS is irritable bowel syndrome. IBD is much rarer than IBS. One in five people has IBS, but only about one in 10,000 has IBD in Malaysia. Irritable bowel syndrome (IBS) is classified as a functional gastrointestinal disorder, which means there is some type of disturbance in bowel function. It is not a disease, but rather a syndrome (a group of symptoms).

These typically include chronic abdominal pain or discomfort and diarrhoea, constipation, or alternating bouts of the two. IBS does not cause inflammation. Unlike IBD, IBS sufferers show no sign of disease or abnormalities when the colon is examined. IBS does not produce the destructive inflammation found in IBD, so in many respects it is a less serious condition. It doesn’t result in permanent harm to the intestines, intestinal bleeding, or the harmful complications often occurring with IBD.

People with IBS are not at higher risk for colon cancer, nor are they more likely to develop IBD or other gastrointestinal diseases. IBS seldom requires hospitalisation. IBS can, however, cause a great deal of discomfort and distress, and can severely affect an individual’s quality of life. Its symptoms can range from mildly annoying to disabling – impinging on a person’s self-image, social life, and ability to work or travel.

IBS usually begins in late adolescence or early adult life – most often at times of emotional stress. Symptoms can vary widely, but most experience some degree of chronic and persistent abdominal pain, constipation, diarrhoea, or constipation alternating with diarrhoea. Other symptoms include increased amounts of mucous in the stool, gassiness, abdominal bloating and distention.

Symptoms commonly occur after eating a large meal or when you are under stress. Often, symptoms are temporarily relieved by having a bowel movement. Anemia, bleeding, weight loss, or fever are not symptoms of IBS. The diagnosis of IBS can not be confirmed with typical diagnostic tools. Therefore, a diagnosis of IBS is based on the presence of symptoms and elimination of other causes. Tests such as blood or stool tests, endoscopy and imaging tests may be used to help rule out other diseases.

The cause of IBS is not fully understood. IBS is believed to be caused by a disturbance in the way the brain and the gut interact. Stress is not the cause of IBS but can aggravate it.

Ordinary stimuli – eating, stress, hormonal changes, gaseous distension, and certain medicines or foods(oily, spicy and especially FODMAP foods which are known to cause excessive production of gas in the bowels) – can trigger an exaggerated response in people with IBS, causing spasms.

Sometimes the spasm delays the bowel movement, causing the stool to remain in the colon for a long time. Too much water is absorbed, causing it to become hard and difficult to pass, leading to constipation. At other times, spasms push the stool through the colon so rapidly the fluid cannot be absorbed, resulting in diarrhoea. Spasms can also create other symptoms of IBS such as cramps, urgency or bloating.

Since the underlying mechanisms that cause IBS are not yet understood, treatment typically targets the symptoms. Unfortunately, even this can be difficult, since people have varying symptoms, either alternating or concurrently. The first line of treatment for IBS should be education about the disorder. For mild cases, symptoms can often be managed with dietary changes(avoid FODMAP foods, spicy and oily diet) and stress management techniques.

Medications can be an important part of relieving symptoms in more severe cases, but no single medication or combination of medications works for everyone with IBS. IBD comprises of two kinds of diseases: Crohn’s disease and ulcerative colitis. People with Crohn’s disease can have ulcers and inflammation anywhere along their digestive tract all the way from the mouth to the anus. People with ulcerative colitis have ulcers usually confined to their large intestine.

The cause of IBD is not known. People who develop ulcerative colitis are thought to have an increased risk of the condition, which is passed down from family members. When a person with this inherited risk is exposed to a trigger (an illness or something in the environment), the immune system is activated. The immune system recognizes the lining of the gut as foreign and attacks it, leading to inflammation. This inflammation causes the lining of the colon to develop ulcers and bleed.

People with IBD have an increased risk of colorectal cancer. Your risk of colorectal cancer is related to the length of time since you were diagnosed and how much of your colon is affected. In general, people who have had the disease for a longer time and those with larger areas of disease have a greater risk than those with a more recent diagnosis or smaller areas of disease. The diagnosis of IBD is usually confirmed through endoscopic biopsy of the affected area of the digestive system.

Like those suffering from IBS, IBD patients also should reduce the intake of FODMAP foods, and oily and spicy foods. Most IBD patients need some form of medical treatment. Anti-inflammatory drugs such as corticosteroids can help reduce inflammation. But in more severe cases, doctors may prescribe immune suppressant drugs. In some cases surgery to remove parts of the bowel may be helpful too.