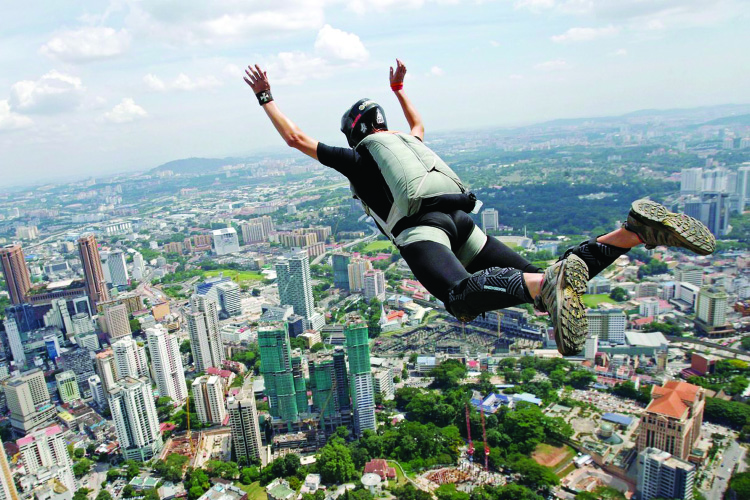 Think of extreme sports, and images of daredevils performing risky manoeuvre and death defying stunts often comes to mind. But with extreme sports becoming more accessible and mainstream, you don’t have to be a daredevil to give one a try.If you find conventional sports too mundane and repetitive, and who like the challenge of problem solving and living on the edge, extreme sports may just be the thing for you.

What are extreme sports?

Extreme sports are events characterised by high speed and high risk, with an element of danger involved that give participants an adrenaline rush. They can take place on land, in the air or on water. Some are individual sports like skateboarding, BMX and motorcross. Others like outdoor climbing can be done in teams. Here are some examples:

A parasail is a special parachute with winglike extensions that lifts a rider in its harness up and through the air when towed by an automobile or motorboat. In parasailing, the parasail is attached to a long tow rope, which is pulled along by a speeding form of transportation. When the speed exceeds the stalling speed, the parasail rises, hoisting the pilot up into the air.

Rock climbing is an activity in which participants climb up, down or across natural rock formations or artificial rock walls. Climbing is all about strength, balance and being creative in learning to overcome obstacles. It’s a whole-body exercise which involves the entire upper body right down to the legs and torso. Rock climbing has been separated into several different styles because of the wide range and variety of rock formations around the world.

BASE jumping uses a parachute to jump from a fixed position. The acronym stands for the four categories of fixed object :

Some say this sport is the closest a person can get to flying like a bird, and is the one of the most recognisable extreme sports. And contrary to popular belief, parachuting is not as dangerous as you might think with less than one fatality per 150,000 thousand jumps.

A typical jump is freefalling from 4,000m with the parachute opening at 2,500m. For a beginner’s first jump, you can tandem jump whereby you’re attached to your instructor. Basic skills include safety, free fall manoeuvres, parachute operation and how to land.

Abseiling, or rappelling as it is called by many mountaineers, is sliding down a rope under controlled conditions. The term comes from the German word “abseilen,” which translates as “top rope down.”

It’s a technique used by people who are rock climbing, caving, canyoneering and mountaineering to get down steep cliffs or even man-made objects, such as buildings or bridges.

Age aint nothing but a number

There are many avid extreme sports enthusiasts in their 40’s and 50’s as well as teenagers or younger who take part in a variety of extreme sports.

Team sports such as caving and rock climbing required high levels of teamwork and trust between participants. It’s not surprising then that some of the deepest relationships can be made through bonding with your extreme sports teammates. This can improve your relationships with people in general and your interpersonal skills.

Express yourself and build character

Both solo and team extreme sports can build self-confidence, relieve stress, and promote physical fitness. Qualities like discipline, persistence, and determination. Certain sports such as BMX freestyling , are more artistic and creative, and allow for greater self expression and creativity than say running, swimming or regular team sports.

Extra motivation to work out

Wanting to improve in extreme sports, whether its greater upper body strength for rock climbing or more flexibility for those skateboard flips, can be a strong motivator to hone those muscles in the gym.

Be sure to stretch and warm up before any sporting activity

A certain level of caution and maturity is important. Don’t be careless and take things lightly especially when it comes to safety issues

Have adequate food and water

Keep nails short, hair tied up and properly attired with the right shoes

Have a positive right mind-set and willingness to get down and dirty.

Don’t be afraid of getting soiled/ruining your hair, manicure, pedicure, or getting scraped and bruised

With the exception of extreme motorsports and B.A.S.E jumping, the true injury rate for many extreme sports is quite low. A British Journal of Sports Medicine study reported only 139 skateboard injuries requiring medical attention over four years, despite it being a popular sport. In many cases, the injuries occurred during “failed trick attempts.”

Some studies indicate that most people injured while participating in extreme sports were not wearing any type of protective gear. So when undertaking high-risk manoeuvre, be sure to wear protective equipment that is in good condition.

It also pays to understanding the difference between real and perceived danger. Rock climbing can be a very scary experience, but the danger is more perceived than real, as the climbing ropes can hold up to 2,500kg of weight.

Real dangers, on the other hand, can come from anywhere and anytime especially in the outdoors. Sudden floods for example, can turn calm jungle river into raging rapids that test the skills of the best white water rafters.

A generous application of common sense, and always making sure your gear is in good condition, can keep yourself safe even in the most demanding situations.

How much does it cost?

The costs for equipment vary with each sport. Below is a rough guide for how much to splurge on extreme activities.

Where can you go?