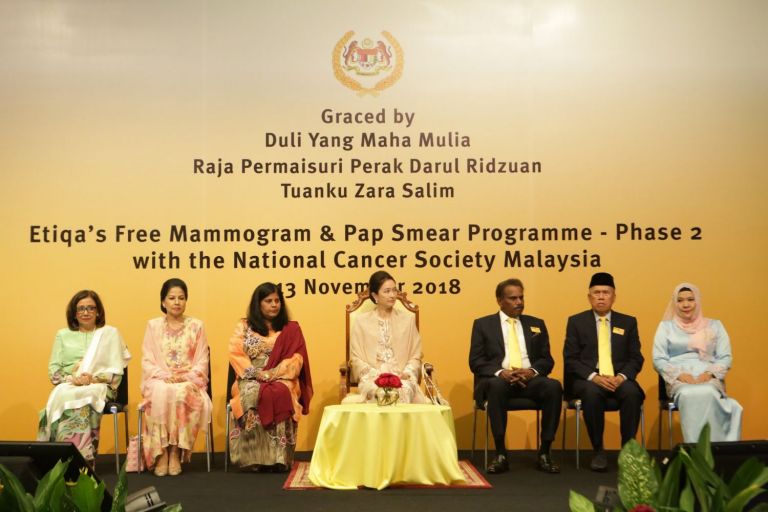 This follows the successful completion of Phase 1 of Etiqa’s Free Mammogram Programme, in which 5000 underprivileged women across Malaysia were given access to free breast screening, with further good news that there were no confirmed cases of cancer.  The programme, which was launched in July 2017 saw Etiqa and NCSM embarking on a year-long journey to raise awareness amongst underprivileged women on the importance of early detection in improving breast cancer survival rates. Eligible women from many communities across Malaysia were transported to the NCSM Centre in Kuala Lumpur, or appointed hospitals across the country for free mammograms.

A short film was screened at the launch featuring some of the beneficiaries from Phase 1.  One of them, Wak Don, an Orang Asli woman from Kampung Pos Musoh, expressed her gratitude towards Etiqa and NCSM.  As a homemaker, whose only source of income is selling the produce from her garden, she said that while she was aware of the pitfalls of a grave disease such as cancer, accessibility to the nearest hospital and cost was a huge burden on her.

Another beneficiary, Radzimah Mat Yasin, lost her sight at the age of two after a bout of fever.  17 years ago, her husband died, and to sustain herself, she works part time at the Malaysian Association of the Blind and gets a monthly Disabled Workers’ allowance of RM350 from the Government.  She praised Etiqa for the concern it showed her by providing transportation for her to attend the free breast cancer screening session.

In his speech, Datuk R. Karunakaran expressed his delight that Etiqa was partnering with NCSM once again, this time on a much larger scale.  He stated that in view of the success of Phase 1, Etiqa as a group, has decided to increase contribution towards the programme from RM1.67 million to RM2.85 million, and where in Phase 1, 5000 underprivileged women were screened for breast cancer, now in Phase 2, 6000 breast cancer screenings are targeted, and will be expanded to further include 3000 cervical cancer screenings.

He also said that this is a timely reminder for women to focus on their health and to take the opportunity to get themselves screened, revealing that insurance and takaful claims for cancer are highest of all critical illness claims, contributing to 86% of female critical illness insurance claims with breast cancer being the highest at 50% and cervical cancer at 20%. If caught in its early stages, breast and cervical cancer can be treated effectively with extremely high survival rates, and if caught late, it is often fatal.

“Cancer control is deeply complex – protecting Malaysians from this disease is a huge task, and can’t be achieved by any one sector alone,” said Dr Saunthari Somasundaram, President of NCSM. “The United Nations calls for a multi-sectoral, all-of-society approach, and Etiqa’s Free Mammogram programme is a great example of how the private sector, civil societies, public as well as private hospitals, and community leaders can work together to ensure that nobody is left behind.

“The second phase, which also seeks to help women prevent cervical cancer, is another big step in reducing the top cancers in Malaysia. We are proud to work with these agents of change, and encourage corporations to follow the lead and play a bigger role in serving society through their Corporate Social Responsibility (CSR) programmes,” she added.

Norlia Mat Yusof, Chief Investment Officer, MAHB, and one of the longest serving female exco members said, “As a leading local insurance and takaful operator, we’re as dedicated to serving our community as we are to serving our customers.  Our organizational culture is making things Fast & Easy, whether it is to purchase, submit claims or receive payouts. But we would also like to extend that philosophy to the community out there by letting the women know that getting screened for breast and cervical is just as Fast & Easy.  Transportation is provided, screenings are free, and results are shared soon after. This is why we have our Fast & Easy ambassadors here with us today, Dato’ Zainal Abidin and Dato’ Afdlin Shauki, as they too share our vision in delivering Fast & Easy experiences for the community.”

NCSM works with local communities and NGOs across the country to identify underprivileged women for this programme. Eligible women and interested community leaders are encouraged to call Angela or Dina from NCSM at 03-2698 7300 for more enquiries on the free mammogram and free pap smear programme.