End of the World? 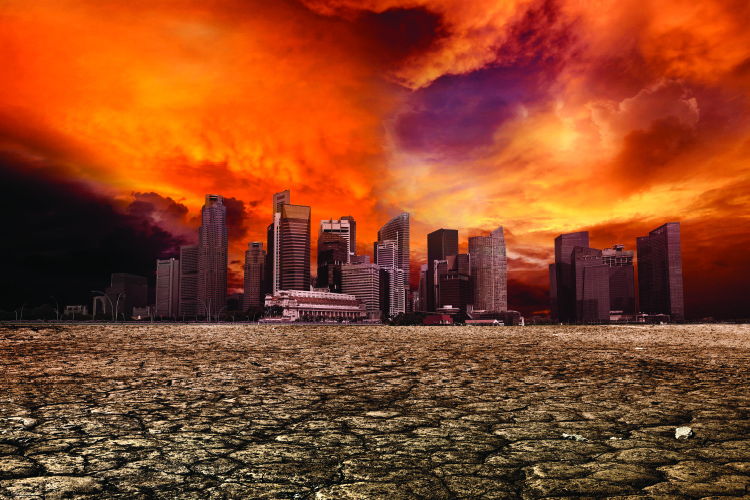 Global warming is an issue that has continuously plagued the earth. It was a hot topic in the 90s and still warrants concern every now and then. You must have heard of the term countless times too but do you know what exactly it is? According to the Oxford dictionary, global warming is defined as “a gradual increase in the overall temperature of the earth’s atmosphere generally attributed to the greenhouse effect caused by increased levels of carbon dioxide, chlorofluorocarbons (CFC) and other pollutants”.

The greenhouse gases such as carbon dioxide and nitrous oxide come from open burning and engines of motor vehicles. How the temperature of the earth rises is by the entrapment of heat, should escape from Earth, by these greenhouse gases. Climate researchers now predict that the temperature of earth will increase by 6.3oF (14.2oC) by the end of century, based on reports released by United Nation Environment Program.

Global warming will have adverse effects on us and the environment. For instance, when the temperature rises, the sea level rises too as ice in the North and South Pole start melting due to the heat. This will lead to floods in the lowland areas. Stronger hurricanes, such as the devastating Katrina hurricane in 2005, will possibly occur too. Many lives were lost and properties damaged in the disaster which rendered one million residents homeless. Global warming also destroys crops and affects livelihoods and the economy especially in nations which rely on subsistence agriculture as a source of income.

Pollution is another concern that we have pretty much accepted as part and parcel of life in the city. When ‘pollution’ is mentioned, air and water pollution usually comes to mind. However, Wikipedia states that “pollution is defined as the introduction of contaminants into a natural environment that causes instability, disorder, harm or discomfort to the ecosystem”. As such, any substance with a presence of contaminants is deemed to be polluted. There are 5 main types of pollution induced by human, namely water pollution, air pollution, land pollution, sound pollution and light pollution, which is probably the least heard of.

Water and land pollution are caused by disposal of waste in an improper way such that it causes harm to the land and water. Non-biodegradable waste such as plastic being buried underground or throw into the waters is poison to the ecosystem. Fish will get caught inside a plastic bag (or the other way round) and die. Poor agriculture practices such as the use of excessive pesticides and fertiliser will render the soil infertile as well as pose a threat to life in the soil.

On the other hand is air pollution, caused by greenhouse effects as a result of human activities such as open burning, gas released from factories and fossil fuel power plants. These contaminants pollute the air we breathe in and expose us to various respiratory disorders. If that isn’t enough, we have to contend with haze and acid rains brought about by air pollution.

Haze isn’t just a health hazard but also poses a threat to safety in circumstances when visibility is low for drivers and pilots. The haze that enveloped South East Asia in 2006 was one of the worst cases in history. Uncontrolled burning to clear cultivation land in Kalimantan, Indonesia, had led to poor air quality in Malaysia, Brunei, Singapore, Thailand and Indonesia. The people of the five nations had to endure six months of respiratory problems and poor visibility before the northeastern winter monsoon in December helped to improve the air quality.

The forms of pollution which has yet to make a severe impact on man are sound and light pollution. Sound pollution is caused by the presence of excessive noise. While sound pollution isn’t detrimental to Mother Earth, it is mentally and physically harmful to humans and animals.

Sound pollution can lead to the loss of hearing, panic attacks, an increase of blood pressure and risks to the cardiovascular system. As for light pollution, the International Dark-Sky Association (IDA) defines light pollution as “any adverse effect of artificial light including sky glow, glare, light trespass, light clutter, decreased visibility at night and energy waste”. Light pollution is most common in metropolitan cities so much that the stars in the night sky are obscured. When this happens, health is at risk as well as interference with astronomical observations take place too.

Endangerment and extinction of species

More species of living things are disappearing from Earth. A few species are somehow spotted and make a comeback but many more are at the burning edge of extinction. Man are greedy creatures; the land and space we have are never enough so much that we need to encroach into the territories of the flora and fauna. More deforestation occurs by day to meet the increasing needs for space. The wild are driven out of their homes and when they end up in our spaces while out venturing for food, they are shot instead for being a threat to our safety.

The loss of habitat isn’t the only issue threatening the existence of various species. More animals are being hunted for their skin, meat and parts due to greed and beliefs that the man’s ‘powers’ will be boosted through the consumption of the parts. The Black Rhino, native to southern and eastern African countries, is one of the most endangered species. Since 1970, 90% of the Black Rhino population has been wiped out, leaving only 3,000 more of these gentle creatures in the wild. The rhinos are killed primarily for their horns and thick skin. While rhino trading has been banned for more than twenty years, illegal hunting is still rampant due to the huge demand for rhino parts.

A study has also revealed another 188 mammals in the Critically Endangered category, including the Lynx pardinus (Iberian lynx) which has a population of just 84 – 143 adults. The species continues to decline in number due to a shortage of its primary prey, the Oryctolagus cuniculus (European rabbit). China’s Père David’s deer is now listed as “Extinct in the Wild”. Perhaps the most tragic extinction is the Passenger Pigeon which was the most common bird in Northern America 200 years ago. Due to massive hunting for this bird as a cheap source of food for slaves back then, its population decreased sharply over the years. The last Passenger Pigeon, Martha, died at the Cincinnati Zoo on September 1, 1914.

It isn’t only the animals who are at risk of eradicated from Earth. Meranti trees produce one of the most sought-after timbers with the trees being chopped down to make flooring and furniture. Illegal and irresponsible logging is a threat to the trees; the IUCN Red List has listed Meranti Rambai Daun (Shorea acuminate) as a critically endangered species in 1998. The Meranti trees must be protected not just because they are an important wood source. Meranti trees are huge, so they have a role in protecting the rainforest structure, failure which would lead to the ecology system breaking down. This is the reason why meranti and other timber trees need to be conserved and protected.

So now we see that our world is not what it used to be. It is indeed scary that a species so common can be wiped out just 200 years later. The Earth is getting tired and will breakdown soon if we continue to torture it with endless destructive activities. When the apocalypse will happen (if it does at all) is not important but what is crucial is that we steer our ways of living towards being Earth-friendly.

There are little things we could do to play our part in saving the Earth:

It isn’t difficult to do; you can start by using energy-saving bulbs or even motion-sensor lights that turn on upon detection of movement.

If the celebrities can do without fur and animal skin, why can’t you? It isn’t just the bags and belts made of animal products that you need to steer clear of, stay away from traditional medicine made of harvested animal parts too.

Be a responsible pet owner

If you can’t be one, it is best that you don’t think of even taking in a pet.

Spot and speak up

If you come across any irresponsible acts towards Mother Nature, report these to the authorities. It could be incidences of open burning or water pollution.

Love Mother Nature as we love ourselves and don’t take more than what we need.