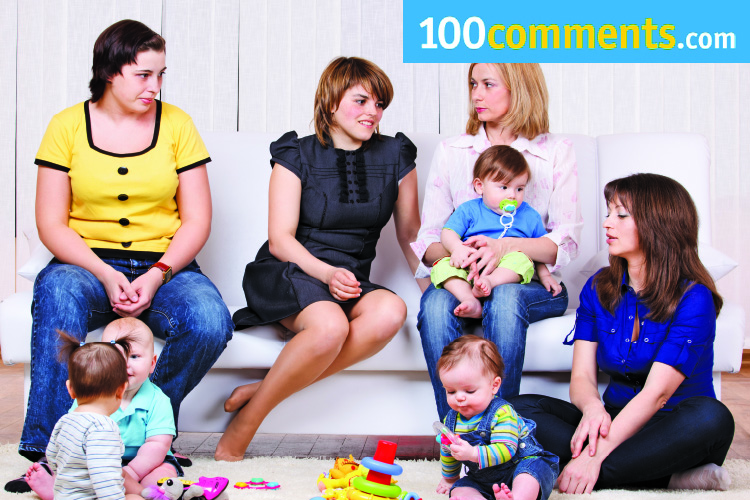 If you remember your high school days, chances are you might recall a bully or two among your cliques. You know, that one queen bee who simply had to win at everything or she will make your life a living hell; or the one who had all the latest gossips which you had to pretend to believe or else! Well, becoming a parent, for some, could mean a deja-vu of sorts for many of these dramatic teenagers seem to carry their despicable tactics into their parenthood, where they seem to live for gossips and are constantly comparing themselves with other moms.

Whatever we wish to call them, you’ll recognise a mean, dominating or even rumour monger mommy for she’ll be the one who either sees you as accomplice or a target. That’s right, it’s one or the other with them and it’s unlikely to be just a friend to chill with and discuss the contents of your little ones’ diapers.

If you happen to be her ‘friend’, and at the same time a member of a mommy clique which you hope to spend some quality time with, you might instead be dragged into dramas you did not create, making you look as bad as her. If you’re a target, well, you’ll know it straight away when you feel the breeze of her cold shoulder and of those ‘with her’. Either way, it’s not a good position to be in.

If you’re her friend…

The thing with drama mamas, as mentioned earlier, as much as you’d like to keep things as uncomplicated as possible, it’s unlikely to be ‘just a friend’. A friend, to such a mom, is a willing accomplice to her malice and determination to be the queen bee of her clique. So, what can you do to make your life a little more tolerable if there happens to be a drama mama in your circle of mommy clique?

When it comes to gossip, it’s not easy to back off without seeming rudely disinterested, but it’s the best you can do for yourself. If you don’t want to get sucked into that wild and ugly whirlwind of gossip, you’ll have to trust us and diffuse malicious talk at its track once it reaches your ears.

Remember too that silence is often interpreted as agreement, so no nodding away, now! Instead, try voicing out carefully and consciously, that you’d rather not take part in conversations about other individuals when they’re not there to explain their alleged unfortunate situation or defend themselves.

The fact is, as severe as the situation may seem, you don’t have to be a participant!

If a drama mama is busy spreading rumours about another woman’s parenting, you’re being pretty naive if you think she’s not doing the same about you behind your own back. So, for one, be very careful about the conversations that take place between the two of you or in her presence. Resist sharing personal views about anything or anyone with this individual, much less personal information about yourself, for you can be sure she will use it against you in the future. Of course, if you can help it, keeping away from her as much as possible will be the safest bet.

Don’t get involved, ever

Drama mama can’t create trouble on her own. She’ll always need to have someone on her side to either validate her actions or take the fall for her. So, if this unscrupulous individual happens to call you up for a prattle about the way another mother dressed for a toddler’s birthday party, diffuse the topic and change the subject at once.

Even if she’s the only one talking, just by giving her your ears could mean being implicated if this gossip ever gets out of hand. Never, ever take the easy way out and agree with a gossip queen or tell her what she wants to hear, for, at the end of the day, it spells nothing but trouble for you.

If you’re a target

There is no way one can be a target of malice and not know it. Gossip has a way of coming around and you’ll know what’s going around about you once it comes back to you. It’s not at all a nice position to be in, but you don’t have to suffer the consequences if you knew how to get around it. Here are some suggestions.

Cool down, you don’t need the aggravation

Anger has never done anyone any good. In fact, it’s one of the most unhealthiest emotions. Your body will tell you when you are about to boil over. Maybe your heart thumps and races, you feel hot, or terribly bothered. Know the signs that you’ve had enough and remove yourself from the situation.

Remember, this is real life and unlike reality TV shows, you’re not contractually obligated to stay and ride out a situation that is bad. If you hear or overhear a piece of gossip about you, it doesn’t matter if it’s true or not, you can always excuse yourself and walk away.

Even adults get hit with feelings of “not fitting in” and it can affect so badly. That’s when it’s time to seek out and make some new friends. Remember too, that like attracts like, so if you’re truly against mean moms and drama queens, you’ll attract the kind of friends who think like you too, provided you make it clear that you’ll have no part in mama dramas.

You’re only responsible for yourself and yours

Remember, the only family you are responsible for is yours. What other people do is their problem and if you let their actions anger you, you are wasting your precious emotional energy on them. So, if you feel that there’s just no end of a drama mama’s tirades, hey, it’s not your problem! Just forget about her and mind your own thing.