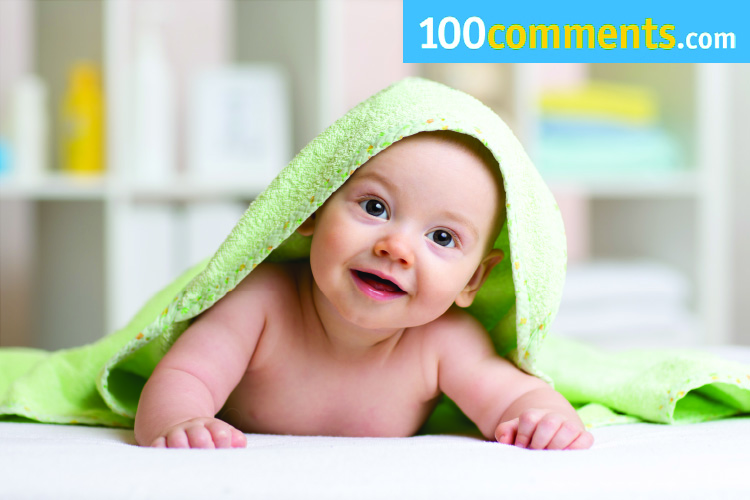 While a baby’s skin is commonly described as soft and smooth, there will be times during the developmental stages when it will look and feel less than perfect. Sometimes, environmental factors may be the cause for this and at other times, these changes are caused by certain illnesses. Here are some common skin conditions that occur and what to expect.

These might look like tiny whiteheads, surrounded by reddish skin and are most likely to appear on the cheeks, forehead, chin and sometimes, back. Your infant’s baby acne can become exaggerated when he or she is hot or fussy or when the skin is irritated by saliva, milk residue or rough fabric. Clothes washed with strong detergent may also cause an outbreak.

Most cases of baby acne will clear up on their own, but in the meantime, cleaning the little one’s face with water and applying a mild moisturiser can improve the skin’s appearance. Do not attempt to use acne medicines intended for adults on a baby!

Switching to a gentle laundry detergent meant for babies will also help.

Thanks to the chickenpox vaccine, not many kids today experience a full-blown case of chickenpox. It is still however, very contagious, spreads easily and leaves itchy rashes, spots and blisters all over the body.

The first symptoms of chickenpox are fevers, vomiting, headaches, muscle aches and appetite loss. The virus goes through stages and begins as little red spots that turn into tiny fluid-filled blisters in a few hours. These blisters will eventually burst, dry up and crust over.

The chickenpox vaccine is an optional vaccine not provided in our National Immunity Program. Hence, parents should take the initiative to ensure that their children receive this immunisation from a hospital or family clinic.

Chickenpox will generally subside in a few days and you can help your little one recover by making sure he or she is getting plenty of rest. Additionally, offer paracetamol and extra fluids to reduce fevers and treat spots with calamine lotion.

Cradle cap generally resembles a very bad case of dandruff with yellowish, greasy, scaly patches on the head, face, ears and neck. Cradle cap is unsightly at the most but is not uncomfortable or itchy and should not bother your baby. It is also a common condition that tends to develop within two or three months after birth and will clear off on its own.

Washing your baby’s hair regularly will help remove the flakes. You can also purchase special cradle cap shampoos from local pharmacies. See your doctor if cradle cap becomes severe or if it spreads on your baby’s body and face.

Eczema is a common skin condition that causes dry, itchy, red and cracked skin which can sometimes ooze fluid and bleed. Causes to this condition are not clear, but those who have it can often times suffer sensitive autoimmune systems and asthma as well. The most common type of eczema is known as atopic dermatitis and most children outgrow the problem when they hit their teens. Some though, may have to live with the symptoms all through adulthood.

There is no known cure for atopic dermatitis, but there are treatments that can ease the symptoms, such as moisturisers to reduce dryness, and topical corticosteroids in the form of creams or ointments that reduce swelling and redness during flare-ups.

Parents are also advised to be alert on what triggers the flare-ups in their kids so that they may have a better chance of controlling the situation and prevent flare-ups.

It is a highly contagious bacterial infection on the surface layers of the skin. Impetigo will begin as blisters around the nose and mouth but can spread to other parts of the body as well. Some of these blisters are tiny and tend to burst easily, while others may be larger and take a few days to burst. Once the blisters have burst and dried up, a yellow-brown crust will form and gradually heal.

Impetigo is not painful, but it could be itchy and give way to fevers and swollen lymph nodes. Impetigo can be spread through close contact or shared towels and toys. It could also be spread throughout the body via scratching.

Impetigo can be effectively treated with antibiotics which can be prescribed as a cream or as tablets. The condition is also not that serious and symptoms will normally clear up within two or three weeks even without treatment.

With treatment however, an affected child will get better in a few days and this could also reduce likelihoods of further contraction.

Warts are virus-caused skin-growths that mostly appear on the hands – especially around the nails where the skin has been broken. They normally look like raised, grainy bumps and will probably be the same colour as the skin. Warts are mostly spread by touching objects used by the person with warts, and they can also contain one or more black dots within them as well.

To prevent these harmless but unsightly warts from spreading, stop your child from biting or picking at those nails. Cover warts with plasters and after a while, those bumps will disappear on their own.

Those red puffy rashes around your baby’s genitals, bottom and the folds of his or her thighs are most likely nappy rashes. They can appear to be pimply and can be either dry or moist. Nappy rash occurs when the skin around your baby’s diaper area becomes irritated from prolonged exposure to urine or excrement. Nappy rash can also be the result of fungal infections or rare skin conditions.

Keeping your baby’s nappy area clean and dry will help. Also, change baby’s diaper frequently. You can also prevent nappy rashes by using a barrier cream or treating the rash with a nappy rash cream. If the rash persists and develops into a bright red rash with pimples that spread to the folds of the skin, your child may have a thrush infection which may need a doctor’s attention.

Heat rash is common in Malaysia due to our warm environment which easily causes overheating. They may also occur if a baby is overdressed. This rash resembles pimples and bumps, appearing on the head, neck and shoulders of babies.

Use loose and cool clothing for your baby. You can also place your child on a cotton towel which absorbs sweat or apply a wet and cool washcloth now and then on areas affected by the rash. Try to keep your baby cool and dry at all times.

Ringworms are often in the form of one or several red rings of rash on the chest, stomach, thighs or back. The rings will be crusty or scaly on the outside and smooth in the middle and can also feel itchy. This condition is not caused by worms although its name suggests otherwise. Instead, a fungus that lives on dead skin, hair and nail tissue is the culprit.

Ringworm is contagious and passed on by skin-to-skin contact. Children can also pass it to other kids especially if they share combs or towels.

It’s easily treated so if you suspect your child has ringworms, contact your doctor.

Hand, foot and mouth disease is self-limiting so it can get better on its own. Symptoms will normally last seven days and possible home treatment options include paracetamol or ibuprofen. If you have reason to worry about your child’s condition, contact your doctor.