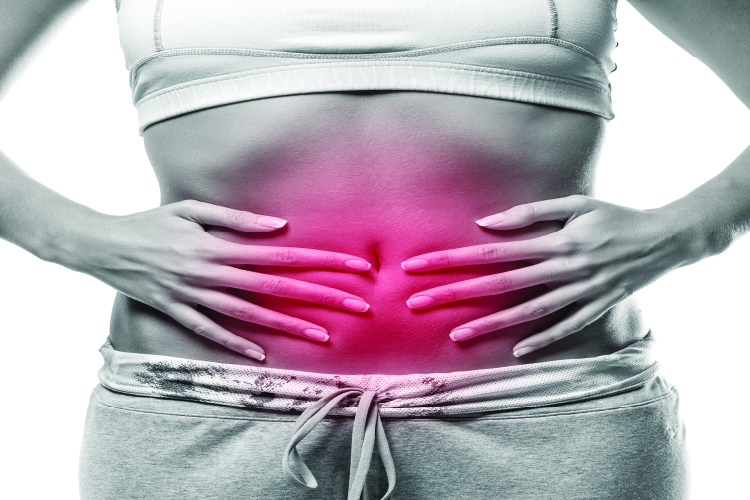 Adolescence is the period that occurs after childhood and before adulthood, from ages 10 to 19. It represents one of the critical transitions in the life span and is characterised by a tremendous pace in growth and development – physical, sexual, social and emotion. Adolescence is the time of both disorientation and discovery. Parents need to be kind, gentle and knowledgeable so as to help their daughters manage this beautiful phase of her life. Here are some of the common gynaecological problems that a teenage girl face while dealing with the puberty phase of her life.

Delayed puberty is failure to develop a timely onset and normal progression of puberty. It is of great concern to patients and their families. Delayed puberty is often identified when there has been no development of secondary sexual characteristics by age 13.

In girls, an unusually late puberty is diagnosed if:

The delayed onset of puberty can be caused by:

If there’s no obvious cause for delayed puberty, such as a long-term illness, the doctor may need to carry out some tests to diagnose the cause. These may include blood tests to check for any problems with the hormones, in order to assess the function of the glands and gonads. Ultrasound and MRI scans may also be used to check for tumours, especially of the hypothalamus, pituitary, adrenal glands or ovaries.

Menstrual disorders are the commonest adolescence gynaecological problem. Abnormal uterine bleeding is a form of bleeding which is irregular in frequency, amount and duration. Most of them present with heavy menstrual flow. Excessive bleeding is common occurrence during puberty. Most often, heavy menses is the result of anovulatory cycle, as the hypothalamus-pituitary-ovarian axis is not fully matured. Other serious causes must be considered for the adolescent with excessive bleeding, including neoplasms, pregnancy, trauma, physical abuse, and bleeding disorders.

Pregnancy and pregnancy-related complications may be the cause of excessive bleeding. The fear of repercussion for admitting that a teenager has had intercourse will cause many girls to deny that they could be pregnant. As many of the causes of bleeding during pregnancy can be life-threatening, a pregnancy test should always be performed, even if the likelihood of pregnancy appears to be minimal.

Neoplasia is an unlikely cause of excessive genital bleeding in adolescents. Endometrial, Cervical and vaginal cancers are rare in this group of patients.

Heavy menstrual flow can be treated with mefenamic acid or tranexaemic acid (antifibrinolytic agent). Oral contraceptive pill or progestogen pill may be used if the symptom doesn’t improve with the first line treatment. Oral contraceptive pills or oestrogen is useful in case of acute profuse bleeding. However if the symptom is not relieved by initial treatment, further clinical evaluation and investigations will be warranted to rule out the rare causes of abnormal bleeding.

Dysmenorrhea is a painful menstruation condition that involves abdominal cramps. Approximately 85% of adolescents reportedly experience dysmenorrhoea and 20% describe it as intense. As this problem can result in school absence and weakness, it is essential to be treated on time. Dysmenorrhea may result from excessive physiologic production of prostaglandins from degenerating ovulatory endometrium. Prostaglandin reduces blood loss by spasm of myometrium and arterioles but may cause severe cramping pain.

Pelvic ultrasound is usually done to rule out the possibility of a congenital anomaly, ovarian cyst or a rare tumour of the ovary or the uterus. Ultrasound does not identify superficial peritoneal endometriosis, but can reveal an endometriotic cyst. Rarely a diagnostic laparoscopy may be warranted to confirm the diagnosis of endometriosis which is not an uncommon cause of pelvic pain and dysmenorrhea in adolescent.

Mild dysmenorrhea is usually treated with paracetamol or more effectively with any of the nonsteroidal anti-inflammatory drugs (NSAIDS) such as mefenamic acid (ponstan). If the pain is severe or not relieved adequately with over-the- counter medications, it is reasonable to try oral contraceptive pill for several months. In about 90% there is a dramatic reduction in dysmenorrhea because in the anovulatory state there is little prostaglandin formation.

Ovulatory dysfunction is common in the period immediately following menarche. In a study of healthy, asymptomatic adolescents, 16% developed cysts over the course of one year. Benign cysts are usually functional cyst and should resolve without treatment. Enlarged (unruptured) follicles as well as corpora luteal (in some cases haemorrhagic) make up the majority of these cysts. In most cases, they resolve without treatment within the first three months. In simple- appearing cysts, observation for 3 -6 cycles is appropriate. Repeat ultrasound at 3 to 6 months is necessary to confirm resolution of the cyst. Persistent cyst likely represents a pathologic process and surgical removal should be considered.

Patients with symptomatic cysts are most likely to complain of pain and/or pressure. In these cases and a benign-appearing cyst on ultrasound, ovarian cystectomy should be offered. A laparoscopic approach should be considered standard of care.

Adolescents have a low risk of malignancy in the presence of an ovarian cyst. Germ cell tumours are the most common neoplastic tumours in adolescents. Dermoid cyst (benign cystic teratoma) is the commonest germ cell tumour and cystectomy (surgical removal of cyst) is the treatment of choice.

Torsion (twisting) of the ovary or ovarian cyst is an emergency condition requiring expedited diagnosis and management. Patient will generally complain of abdominal pain, which is likely to localise to the pelvis.

Nausea and vomiting remain two of the most common symptoms. Management of ovarian torsion requires expedited surgical intervention to untwist the ovary, in order to preserve the ovarian function. If a large cyst is present, cystectomy is indicated to reduce the risk of recurrence. The most common condition that presents similarly to the twisted ovary is a hemorrhagic corus luteum. In this case surgery is not warranted unless the ovary is bleeding and the patient is becoming unstable, a very rare event. Pain from hemorrhagic corpus luteum is much more common than torsion, typically occurring in the second half of the menstrual cycle. Adolescents and young adults with ovarian cysts have an excellent prognosis overall. Conservative management can be offered to the majority of patients.

Vulvovaginitis is a condition that involves inflammation or infection of the vulva and vaginal wall. It is a common medical complaint for adolescent girls in the outpatient setting. The adolescent girl who has initiated puberty will have normal vaginal secretions from several different glands. Other substances such as exfoliated cells, cervical mucous, and the secretions from the endometrial cavity and fallopian tubes can be present. This results in a clear to white discharge and considered as normal physiological discharge. An abnormal discharge often is associated with other symptoms, such as complaints of itching or redness.

Yeast Vulvovaginitis caused by one of the many species of fungus known as candida, which normally live in the vagina in small numbers.

Yeast is normally present and well-balanced in the vagina. Infection happens when something in a female’s system upsets this normal balance. For example, an antibiotic to treat another infection may upset this balance. In this case, the antibiotic kills the bacteria that normally protects and balances the yeast in the vagina. In turn, the yeast overgrows, causing an infection. Other factors that can cause this imbalance to happen include pregnancy, which changes hormone levels or oral contraceptive pill which contain high dose oestrogen. Also, diabetes, which allows too much sugar in the urine and vagina, can be a factor. Treatment for candidiasis may include antifungal cream or oral antifungal.

Disorders of the young breast and Breast masses in adolescents

Small breast may result from delayed thelarche (absent breast development by 13 to 14 years). Those with constitutionally small breasts have normal growth and secondary sexual development, and hormonal therapy is unlikely to be benefit. Those with delayed puberty require endocrinologic investigation and management for induction of puberty with hormonal replacement therapy.

Majority of breast masses in adolescents are benign (not cancer). Fibrocystic change is a common clinical diagnosis in adolescence. Patients with fibrocystic changes often have bilateral breast nodularity associated with cyclic pain. Empiric measures (such as reducing intake of caffeine, fat or dairy, wearing a well-fitting brassiere, the use of simple analgesia, evening primrose oil and menstrual suppression with a continuous oral contraceptive pill or oral progesterone) may give symptomatic relief.

Occasionally larger persistent cysts may require percutaneous drainage. Fibroadenomas are benign fibroepithelial tumours and the most common tumour of the adolescent breast. Fibroadenomas usually present after puberty, as a mobile rubbery mass in the upper outer quadrant. A fibroadenoma which is less than 5cm, may be managed with continued surveillance, with initial review after 1-2 months to observe for regression and then 3 monthly until regression is assured. Breast ultrasound scan helps differentiate the category of adolescent breast mass most of the time and is the imaging modality of choice. Breast cancer is rare and the incidence rate in girls between 15 and 19 years is less than 0.5 per 100000.

Human Papillomavirus infection is believed to be the most common sexually transmitted infection worldwide. Persistent infection with high-risk HPV types (e.g. HPV 16 or 18) is considered necessary for the development of cervical cancer. Non-oncologic HPV types (e.g. HPV 6 or 11 )may cause genital wart. Rates of HPV infections are highest in adolescent population. However, HPV infection in young woman rarely progress to invasive cancer. HPV vaccines are safe, well tolerated and prevent both HPV infection and cervical intraepithelial neoplasia (CIN). Vaccination is indicated in girls and women 9 to 26 years of age. Vaccinated women should understand that HPV vaccines will not prevent infection with other sexually transmitted diseases.

Finally, adolescents should be given appropriate education about sexual health, sexual transmitted disease and prevention, contraception, pregnancy and conditions associated with it. They should also be encourage to obtain appropriate gynaecologic care after initiating sexual activity. Adolescence is the only time in our lives when we face parallel psychologic and physical growth; a time when we build the foundation of who we become as adults. Caring for an adolescent can be a challenge in itself, but there are lifetime rewards for our patients and ourselves.