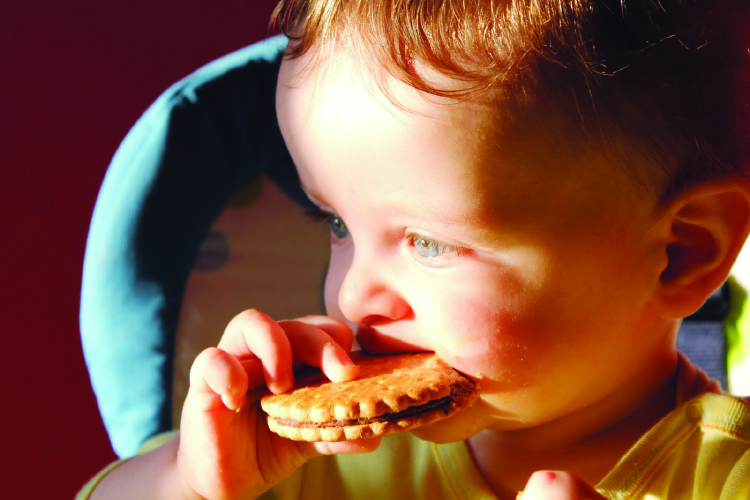 Q: What should I know about serving foods containing sugar and high fructose corn syrup in their ingredients, to my toddler?

The simple carbohydrate, be it sucrose or fructose, is not an essential nutrient for growing up children. Parents may want to avoid giving food containing simple sugars, also because the intake has been linked to dental caries, less micronutrients in diet, excessive calories intake and overweight/obesity.

Commercially, sugar or HFCS is used to enhance taste of food and drink, including juices. During grocery shopping, parents can read and compare nutritional facts and exclude food that uses sugar as its main ingredient. There are also hidden ‘sugar’ in the ingredients with name such as ‘syrup’, ‘sucrose’, ‘glucose’ and ‘lactose’. Watch out for ingredients with names that end with ‘ose’ as they usually mean sugar.

Infant or toddler should not be given simple sugar containing food or drink unless specifically prescribed by doctor or dietician in some clinical problems. This is to prevent inculcating the preference of sweetened food and as the child grows into adulthood, it’s even harder to kick the habit.

Q: I’m a bit confused about whether it’s a good idea for my 26-month old to have a flu jab, as I’ve heard lots of different things about it. She’s healthy and doesn’t have asthma or anything like that.

Influenza causes respiratory symptoms such as fever, sore throat, runny nose and cough. It tends to produce more severe symptoms compared to the common cough and cold but most of the time, it is self-limiting and resolves after several days. In rare cases, it may be life-threatening, spreading to the lung or brain. Mortality rate for influenza is probably less than 0.1%.

Some children have a higher risk of developing severe influenza. This includes healthy children below five years old, diabetics, obese children and children with chronic kidney, heart or lung disease such as asthma.

The current flu jab protects the child from influenza including H1N1. It can be given in children six months and above. Unfortunately, one shot does not confer life-long immunity. The vaccine needs to be given annually for continued protection. Side effects of vaccine are generally minor and comparable to conventional vaccines. Influenza vaccine may slightly reduce frequency of respiratory tract infections in children attending daycare or nursery.

Should you get the flu jab? Armed with these facts, you can now make an individual, informed decision whether to immunise your child against influenza. It is entirely up to you.

Q: I am 20 weeks pregnant and have heavy vaginal discharge. Is this anything to worry about?

High levels of estrogen during pregnancy stimulate the glands in the cervix, causing more secretions that leak out via the vagina. This varies from person to person. Normal vaginal secretions (known as leukorrhea) should be thin, white, milky and mild smelling. Deviations from this norm should be consulted with your obstetrician or midwife, especially if there is any itching accompanying it. There are simple steps, such as a swab or blood test, which can determine the nature of the problem, and how to address it. Some common types of vaginitis are candidiasis (thrush/yeast infection), trichomonasis and bacterial vaginosis.

All are easily treatable but can cause possible harm to the baby if left untreated. There are also natural forms of treatment, such as garlic for candidiasis and yoghurt for bacterial vaginosis.

A bloody or brownish discharge needs to be assessed if it is fresh or old blood or just a dirty area. Clean the area, put a fresh pad on and assess the characteristics of the bleeding, which will indicate the cause. Determine the length of bleeding, quality (light or heavy bleeding, with or without pain), what makes bleeding better or worse, how is the baby moving and how are you feeling (any dizziness etc.). Discuss any bleeding with your health professional. The cause could just be some irritation of the vaginal wall, or something like placental abruption.