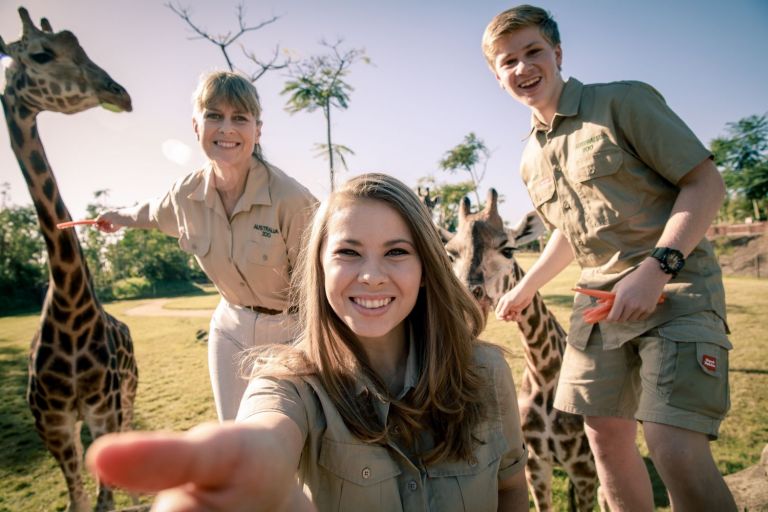 Animal Planet has greenlit Season Two of CRIKEY! IT’S THE IRWINS, as announced on The Tonight Show Starring Jimmy Fallon last week. The series shares the tireless work of the Irwin family – Terri, Bindi and Robert – as they continue Steve Irwin’s mission to bring people closer to animals and inspire people to become “Wildlife Warriors”, with their messages of wildlife conservation.  Their aim is to ensure an abundance of wildlife for generations to come. The current Season One finale of CRIKEY! IT’S THE IRWINS airs Monday, February 18 at 9PM. Season 2 will premiere on Animal Planet later this year.

“I’m so excited for the opportunity to film season two of Crikey! It’s The Irwins with Animal Planet,” said Terri Irwin. “I am incredibly honored to be continuing Steve’s legacy and to be encouraging everyone to take a stand to help protect wildlife and wild places.”

“Our audiences have a front row seat for the Irwin family’s wildlife adventures, immersed in the sights and sounds of so many incredible animals,” said Susanna Dinnage, Global President of Animal Planet. “We are delighted to be sharing their new and inspiring stories later this year with viewers all over the world.”

This season on CRIKEY! IT’S THE IRWINS, audiences met a wide range of animals including a giraffe named Scarlett whom Terri transported over 1200 miles to participate in a breeding program – part of Australia Zoo’s conservation efforts. Cedar, a rescue koala that gave birth to a rare set of twin joeys, closely watched and cared for by Bindi and the team; and Graham, a huge crocodile originally rescued by Steve. After months of croc-wrangling training, Robert finally got to feed Graham live at the Crocoseum at Australia Zoo, to the delight of visitors. The show also documented the family traveling to South Africa on visits to Balule and Entabeni Game Reserves; the Great Barrier Reef; and to the far north of Australia to the Steve Irwin Wildlife Reserve on Queensland’s Cape York for an annual crocodile research trip.

CRIKEY! IT’S THE IRWINS launched globally to Animal Planet in more than 205 countries and territories and according to the most-readily available data, the series has reached more global viewers (36.2MM) than any other globally launched Animal Planet series. In the U.S., the premiere episode ranked as the highest rated series premiere on the network in five years among Adults 25-54 and the highest rated series premiere ever among Women 25-54. Top markets around the world where the series has delivered double and triple-digit ratings increases for Animal Planet include EMEA (UK, Poland, Romania); Nordic (Sweden, Denmark, Norway); LATAM (Brazil, Mexico); and APAC (Australia, New Zealand, Taiwan, Singapore, Malaysia, Philippines). In both the UK and Australia, CRIKEY! IT’S THE IRWINS ranks as the #1 premiere title on Animal Planet over the prior 52 weeks.