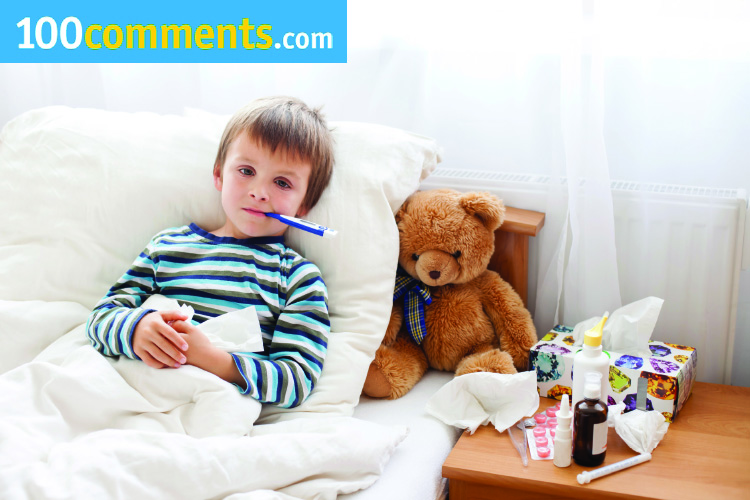 Falling sick while growing up is a fact of life for children. Children can’t help getting the flu, fevers, coughs, etc. Learn more about these childhood illnesses but be sure to consult your paediatrician for proper diagnosis and treatment.

A cough isn’t usually anything to worry about if there is no wheezing as children often cough when they have a cold because of mucus trickling down the back of the throat. However, if your child has a bad cough that won’t go away, it is best to consult a doctor.

If the cough continues for a long time, worsens at night or is brought on by your child running about, it could be a sign of asthma. Some children with asthma also have a wheeze or bouts of breathlessness. If your child has any of these symptoms take them to the doctor. If your child seems to be having trouble breathing, seek medical attention urgently or call an ambulance.

Furthermore, if your child is coughing, let he or she to do so as coughing helps clear away phlegm from the chest or mucus from the back of the throat.

It is normal for a child to have eight or more colds a year. This is because there are hundreds of different cold viruses and young children have no immunity to any of them as they’ve never had them before. However, they gradually build up immunity and get fewer colds.

Most colds get better between five to seven days. Here are some suggestions on how to ease symptoms of the cold in your child:

Children get fevers for all kinds of reasons. In children, a temperature of over 37.5°C is a fever. It can be worrying if your child has a high temperature, but it is very common and often clears up on its own.

Invest in a thermometer as this will become handy when you need to take your child’s temperature.

Also, your baby or child’s temperature may rise during teething, following vaccinations or if they overheat due to too much bedding or clothing.

If your child seems to be well other than having a high temperature – for example, if junior is playing and attentive – it is less likely that it’s a seriously illness.

You should contact your doctor urgently if your child:

If your child has a fever, it’s important to keep him or her well hydrated by offering plenty of cool water to drink.

Chickenpox is preventable through a vaccine and it is truly important to have your child vaccinated as the reasons for vaccination go beyond sparing your child the uncomfortable red blisters. Chickenpox can cause dangerous complications in newborns.

It causes a rash of red, itchy spots that turn into fluid-filled blisters. They then crust over to form scabs, which eventually drop off.

Your child is likely to have a fever at least for the first few days of the illness and the spots can be incredibly itchy, so expect them to feel pretty miserable and irritable while they have chickenpox.

The spots are most likely to appear on the face, ears and scalp, under the arms, on the chest and belly and on the arms and legs.

There is no specific treatment for chickenpox, but there are products available at the pharmacy that may help alleviate symptoms, such as:

This illness is caused by infection from viruses like rotavirus, bacteria like salmonella and quite rarely, parasites like giardia. Viruses are the most common cause of a child’s diarrhea. Along with loose or watery stools, symptoms of a viral gastroenteritis infection often include vomiting, stomachache, headache and fever.

Older children with diarrhea can drink anything they like to stay hydrated including ORS. Popsicles can also be a good way to get fluids into a child who’s been vomiting and needs to rehydrate slowly.

After all, which kid would refuse a popsicle?

If your kids are up-to-date on their vaccines, you probably don’t have to worry about measles. But the same cannot be said for unvaccinated children as there has been reported outbreaks. The infection starts with a fever, runny nose and a cough. As these symptoms fade, a full-body rash appears. Most kids get better in two weeks, but some develop pneumonia or other problems. A trip to the doctor should be in order if the symptoms do not disappear.

Tearing, redness, itching and crusty eyelashes are all signs of conjunctivitis, commonly called pinkeye. Often caused by the same viruses as the common cold, pinkeye spreads rapidly in schools and day care centers. Consult your paediatrician to determine whether your child needs treatment. Most cases clear up between four and seven days.

The mouth is one of the most sensitive areas of the body so when kids get ulcers there, the pain and discomfort can be intense. Mouth ulcers are extremely common in kids and they can form anywhere within the mouth, including on the tongue or the gums and on the inside of the lip. Most often they are caused by viral infections.

Sometimes, ulcers appear for no obvious reason at all. It’ll usually pass within a week and often it’s just a question of waiting till it clears up. One easy trick is to get your child to rinse his or her’s mouth out with a warm salt water solution.