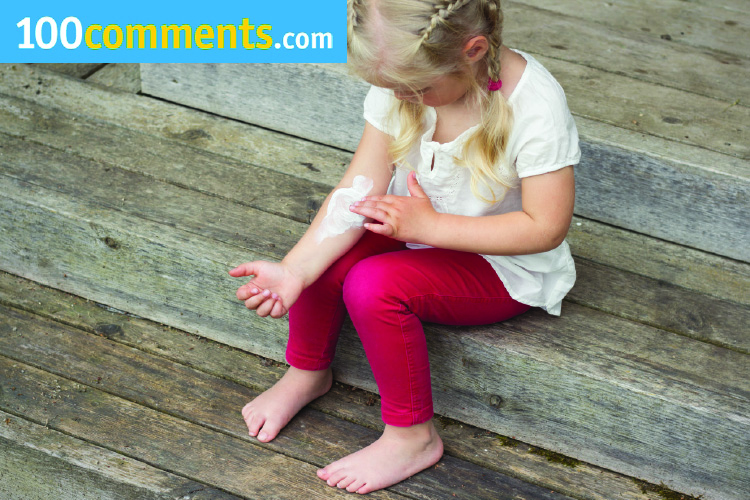 While infection, allergies and changes in our environment are often behind the skin conditions seen in babies and children, many parents feel helpless when they see an unexplained welt, rash or bump on their kid’s skin, especially if they do not know what it is. Here, we will attempt to help you recognise some of the most common conditions. However, do remember to always seek medical advice for correct diagnosis and treatment.

The result of blocked sweat ducts, heat rash looks like small red or pink pimples. They seem to mostly appear over a child’s head, neck, chest and shoulders. The most likely cause of this rash is dressing up the child in clothes that are too warm, but having said that, it may still occur in children regardless, especially in very warm weathers. Dressing children in cool, light clothing during hot weathers can help reduce the possibilities of developing heat rashes.

Chickenpox is one of the most common childhood conditions and also, one of the most contagious too, spreading easily from human to human, regardless of age. It leaves an itchy rash and red spots or blisters all over the body. It isn’t usually serious in healthy children and not too likely to occur more than once in a lifetime. Most children only need treatment at home, including rest and medication to reduce itching, fever and other flu-like symptoms. Vaccinations against this are available and you can ask your doctor about this.

Contact dermatitis is a reaction caused by touching a substance, such as certain soap or skincare products, or the oil of certain poisonous plants. The rash usually starts within 48 hours after exposure. Minor cases may cause mild skin redness or a rash of small red bumps, while severe reactions can cause swelling, redness and larger blisters. Contact dermatitis is usually mild and goes away when contact with the substance ends. If you have causes to worry, do let your doctor know, for your peace of mind.

A wart is a skin growth caused by contact with the contagious human papillomavirus. Warts are known to spread from person-to-person or via contact with an object used by a person with a wart or warts. Picking at warts make them spread faster, so covering affected areas with a bandage might help. While warts are decidedly unsightly, they are relatively harmless to the human body, painless and may disappear on their own. Stubborn warts though may require treatments such as freezing, surgery, laser treatments and chemicals.

A common yet chronic skin issue which causes dry skin, intense itching and a raised rash. As uncomfortable as eczema may get, many children outgrow eczema, or have milder cases as they get older. In severe cases, this non-contagious rash may become infected. What causes eczema isn’t clear, but those affected may have a personal history of allergies and asthma and a sensitive immune system. Your doctor or heath care provider will be the best person to talk to about personalised management of your child’s eczema.

This somewhat dreaded, highly contagious childhood illness starts with a high fever, followed by painful mouth sores and a non-itchy rash. Blisters then appears on hands, feet and sometimes the buttocks and the legs. The disease spreads through coughing, sneezing and contact with liquid from the blisters. It is also present in the stools of an infected person and can remain there for up to four weeks after symptoms have cleared. This is one of the reasons why diligent frequent hand-washing is important to prevent spread of the infection! Home treatment includes ibuprofen or paracetamol and lots of fluids. It is not a life-threatening illness and should subside on its own in about a week.

This relatively mild yet contagious illness is most common in children aged six months to two years and rarely occurs after the age of four. The symptoms are respiratory illness, followed by a high fever, which if left uncontrolled, may trigger seizures. This 3 to 4 day fever may abruptly end and will be followed by a rash of small, pink, flat or slightly raised bumps on the trunk, then the extremities. The fever can be managed with paracetamol for children.

Another rather uncomfortable skin issue to endure is Urticaria, which occurs as a rash or weals and is often itchy, and may even burn or sting in some cases. With Urticaria, a rash may appear anywhere on the body, lasting either for mere minutes or days! It can signal serious problems, especially if accompanied by difficulty in breathing. Medication, foods like eggs, nuts and shellfish, food additives, temperature extremes and infections like a sore throat can cause the rash. While removing the trigger often resolves it, seeking a doctor’s advice is highly recommended.

Contrary to its name, ringworm on the skin doesn’t have anything to do with worms. Instead, this skin infection is caused by a fungus living off dead skin, hair and nail tissue. The condition starts as a red, scaly patch or bump, developing into itchy red rings with raised, blistery or scaly borders. Ringworm is passed on via skin-to-skin contact with a person or animal and by sharing items like towels or clothes.

Most ringworm infections can be successfully treated with anti-fungal creams or ointments.

Impetigo causes red sores or blisters that can break open, ooze, and develop a yellow-brown crust. Sores can occur anywhere on the body but usually appear around the mouth and nose. It is a relatively contagious skin disease and can spread to others through close contact or by sharing items like towels and toys. Scratching on the sore can also spread it to other parts of the body. Treatments include antibiotic cream or ointment, but sometimes oral antibiotics may be needed.