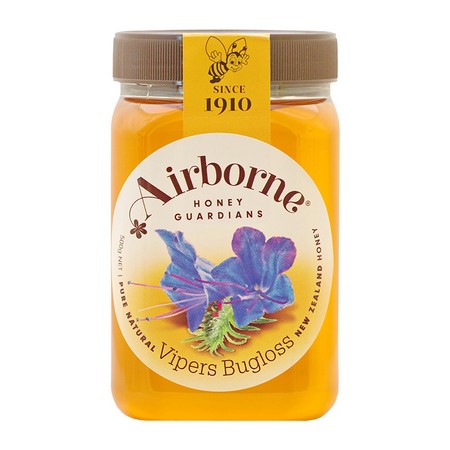 The honey has a delicate flavour with a floral bouquet and being high in fructose is excellent as a drink sweetener, especially coffee where it imparts another flavour dimension. Vipers Bugloss is a close relative of Salvation Jane (Echium plantagineum), another well known honey plant from Australia.

There have been seasons when large quantities of Blue Borage (B. officinalis) are cultivated as a seed crop in Canterbury province, primarily for the extraction of Gama Linoleic Acid (GLA), and a surplus honey crop from this source can arise. It is not known if GLA is found in the honey from this source.

Vipers Bugloss on the other hand is not a cultivated plant but rather grows wild in arid areas with poor soils. When young, the plants areBeehives in a field of Vipers Bugloss – Lake Aviemore highly palatable to sheep and many high country farmers rotate their stock in time with the growth of Vipers Bugloss. Sometimes this is to the advantage of the beekeeper, at others not. Vipers Bugloss is a biannual and grows with a long root system making it drought resistant. It yields nectar at lower temperatures than clover and the resultant honey is often very dry with a chewy or tacky texture.