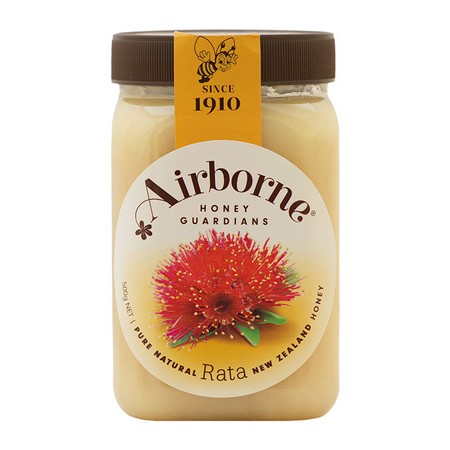 ʻōhiʻa lehua (Metrosideros polymorpha) endemic to Hawaii is another well known species and also an excellent honey producer with a similar honey to Rata.

Rata honey is very light in colour averaging 22 mm on the pfund scale (Standard Deviation – SD 13.9mm) and distinctively flavoured with an almost salty taste. The pollen is triangular and typical of the Myrtaceae (Myrtle) family which includes eucalypts, bottle brushes (Callistemons), Australian Ti Trees (Melaleucas) and leptospermums(manuka). Another distinctive feature of the Myrtles is their similarity of flower structure.

This contrasts with the Canterbury plains less then 100 km away which receives only 25 inches (630 mm) per year. The main cause of this is the rugged Southern Alps lying across the prevailing westerly wind producing wet and dry conditions within only a few kilometres. While flowering intensity is a factor in the Rata crop, the most important factor is a break in what is normally very wet conditions.

Rata honey is one of our fastest crystallizing honeys with a proportionally high glucose content.

Another peculiarity of Rata honey is the almost complete absence of higher molecular sugars. While the initial number of analyses showing this information is low, these have shown an almost total absence of oligosaccharides. This is a feature that could be used for floral source identification but generally the other honey types associated with Rata honey are easy to separate. These are typically Kamahi and Quintinea, both of which flower earlier than Rata, have normally represented pollen spectra and are darker in colour. Rata has also been shown to be low in some natural enzymes, particularly diastase and invertase. This is something that is not unusual in plants that evolved in parts of the World that were separated from European flowering plants early in an evolutionary time scale.