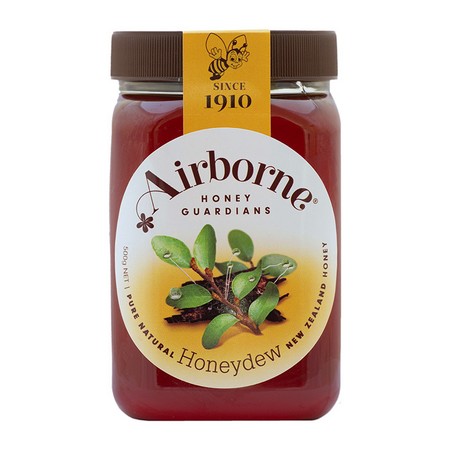 “Honeydew” is a classification of honey thatBee Collecting Honeydew honey from Oak leaf refers to honey produced by honeybees collecting nectar that is exuded from another insect such as an aphid or scale insect. It is quite common in a number of countries and the best known is honeydew from the Black Forest in Germany. World wide honeydew can be referred to variously as “forest honey”, “Pine honey”, “Fir honey” etc. and may sometimes be referred to by the specific species of tree producing the honeydew.
Typically honeydews have lower levels of glucose and fructose and higher levels of complex sugars due to the extra enzymatic actions in the sap sucking insect’s gut. Honeydews don’t normally crystallize due to the reduced levels of glucose and also have a high mineral content which is measured as a high conductivity – this measurement being the main tool to differentiate honeydews in the laboratory.
New Zealand Beech Honeydew honey is one of New Zealand’s premium export honeys. It has a history of export to Europe and specifically Germany since the earlyBee collecting honeydew honey 1970s. There are several honeydew producing scale insects in New Zealand inhabiting a variety of plants. However most of these are small honeydew sources or intermittent production. The beech forests of the South Island are a different story however. Two species of beech tree inhabited by two species of honeydew insect (the sooty beech scales) from the Margarodidae family produce New Zealand’s largest single exported honey crop. The beech trees are Black Beech (Nothofagus solandri) and Red Beech (N. fusca). The two insects are Ultracoelostoma assimileand U. brittini. U. brittini tends to inhabit the trunks and larger branches, while U. assimile is recorded (C.F.Morales) as favouring the upper branches and twigs, thus U.brittini is the insect most likely to be encountered by the casual observer wandering in the beech forests.
The black colour of trees and plants with a honeydew source is due to the growth of a blackTubules from U.brittini with drops fo honeydew sooty mould (Capnodium fungus) on the surplus nectar exuding over the plant and sometimes even the ground. Particles of this fungus are typically found in honeydew being referred to as “honeydew elements” and are used as a part of the identification as honeydew.
Droplets of nectar are highly visible to any observer visiting the beech forest, but bees are rarely seen collecting these. Mostly they are observed foraging on the bark and particularly at the base of the tubules extending from the scale insect buried under the bark.