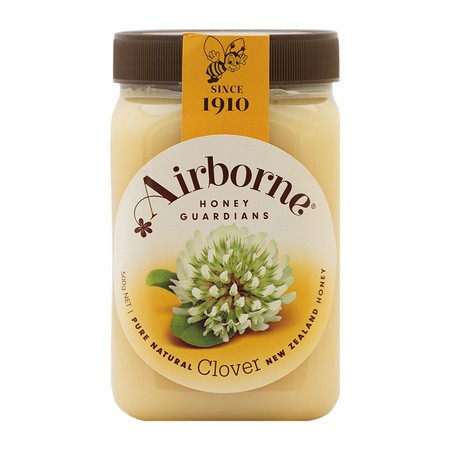 Clover honey is New Zealand’s most common honey type. New Zealand historically has a pastoral economy and a reliance on sheep farming. Clover and rye grass mixtures have dominated pastures with their high forage yield and natural nitrogen fixing for soil fertility. More recently, dairying has become a significant part of the New Zealand rural scene and clover is a major component of pasture in progressive dairy farms where it minimizes the need for synthetic fertilizers with their high carbon footprint.

The normal growth cycle is that clover starts to predominate in the pastures in late Spring and early Summer. The peak of the honey flow is at the point where lowering moisture levels start to slightly tress the plant. This peak may last a few days or in exceptional circumstances (perhaps when boosted by additional rainfall) over a few weeks to produce a bumper harvest. In many areas, high country pasture is oversown from aerial top dressing and beehives in these areas can produce large crops of high quality clover honey.

Clover seed production is another large source of clover forage for honeybees and under good conditions, clover honey production can be exceptional.

The main clover species in New Zealand is white clover (Trifolium repens) but a variety of other clover species are present. These include red clover (T. pratense), strawberry clover (T. fragiferum), subterranean (T. subterraneum) and alsike clover (T. hybridum). Typically these different clovers have their own flowering period that may be before or after the White Clover flowering.