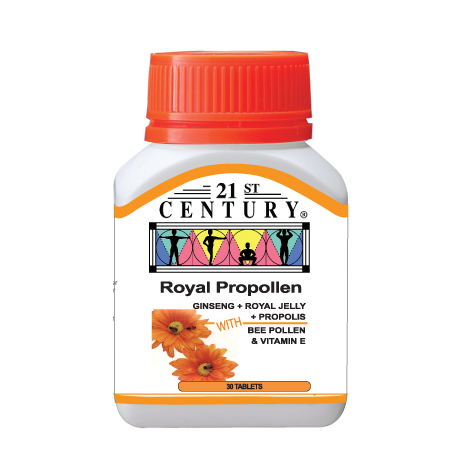 21ST Century’s ROYAL PROPOLLEN has been sold since 1980 and is available in 25 countries. It is the most popular “Bee Hive” product in the whole world. It is sold in some countries as BEE POLLEN with GINSENG, ROYAL JELLY, PROPOLIS and VITAMIN E.

ROYAL JELLY –  is made by thousands of worker bees and it is fed only to the Queen Bee and not to any other worker bee. The Queen Bee starts out as an ordinary worker bee and after it is selected  to be the Queen it is fed Royal Jelly. Then it lives 40 times as long as ordinary bees. That is why it is believed traditionally to have longevity and health benefits for humans.

PROPOLIS – protects bees against bacteria and strengthens their immune system to resist disease. It is believed to have a similar effect on humans.

GINSENG – it is a health tonic that has been used for thousands of years by Chinese Traditional Medicine practitioners.